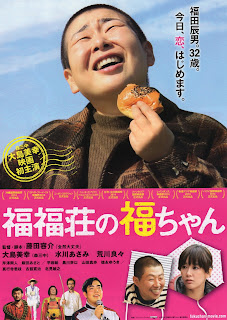 Sometimes a film comes along that you are obligated to watch, though deep down you really have no interest. You keep trying to hype yourself up, only to let that steam dissipate and your mind travel elsewhere. Suddenly you are pushing a deadline and are forced to sit yourself down and watch a film for review. You fall in love, laugh, shed a couple of tears, and laugh some more. When the credits roll, you cheer aloud, for you just had one of the happiest film viewing experiences of your life. You look back at yourself prior to seeing the film and wonder why the hell you weren't excited before. You're an idiot. You are me! Joking aside, I don't really understand why I had prior doubt before seeing this, but looking back, I wish I would have sought this out immediately. For my sin, I will now share with you the utter delight that is, Fuku-chan of FukuFuku Flats! 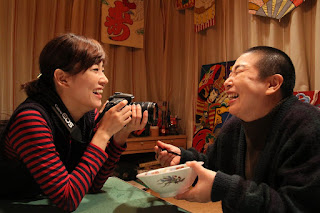 Miyuku Oshima (yes, a lady *mind blown*) plays the quiet middle-aged painter for a construction company of sorts, named Fukuda. The film starts out with a fart joke that made me shake my head, but it does help setup the odd tone and nature of the film from the get go, and for that fart, I thank you movie. Fuku-chan is filled to the brim with some weird characters, weird humor, and all around just weird vibes, but it all works, usually. I don't think there is too much to go into in terms of the story, because the plot it pretty easy to follow and there isn't much to it. Essentially Fukuda lives at FukuFuku Flats and shares the same floor of apartments with some pretty eccentric people, including a weird pantie thief who is overly sensitive and never hesitates to pull out a sharp knife he carries on him, and Okito (Tateto Serizawa), who ended up being my favorite character, whom we 1st meet in the halls of said flats, sporting a ginormous snake thrown around his shoulders. From the 1st frame of the introduction of his character, I felt he'd be my favorite, and I was right. 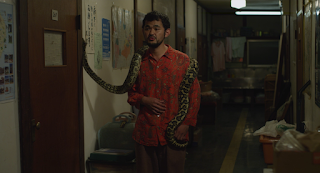 Easily the funniest character in the film, especially his crying...
which happens more often than not!

Fukuda's close friend, Shimacchi (YoshiYoshi Arakawa) is sort of an asshole in a sense, but he means well for his buddy. We sort of just get to enjoy the zany, everyday lives of these characters and get plenty of laughs along the way. At some point we are introduced to Chiho, played wonderfully by Asami Mizukawa, who has a story going on back and forth alongside Fukuda's, which does help set up reason for her meeting back up with him (they knew each other in their childhood), but I felt the scenes prior to their reunion were a bit off, even for a film as quirky as this, and some of the scenes between Chiho and the famous artist played by Toshikyuki Kitami, sort of gave off really weird and almost fake vibes, sort of a downer along an otherwise perfect blend of comedy and offbeat friendships.

I want to give Oshima highest praise for her peformance as Fukuda. Back when I saw the preview for this film, I truly believed Fukuda to be a man. She really inhabits her part and sells it quite well. Almost never did I get taken out of the film by her performance as a male character. It's not really gimmicky either like I was afraid it would be, and I kept founding myself smiling and cheering Fukuda on every moment needed. That character was her's and I can't see it working as wonderfully as it did if it were anyone else. She won an award at the Fantasia Film Festival for best actress, and it was totally deserving. I really wasn't expecting to laugh or be moved quite as much as I was, and I believe that in great part was channeled through a great performance. 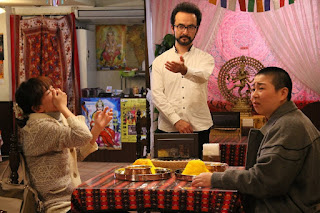 "Curry is fire. Do you really want to put out that flame?"

Now, this film is no crazy, deep drama or anything, and mainly plays it for laughs, and does so quite well. As mentioned before, there is some odd humor, but it almost always works. One of the scenes I thought was ridiculous and semi-annoying at 1st was the curry scene at a restaurant, with Kanji Furatachi having a small role here, but as it went on and where it lead to eventually, it ended up becoming one of the best gags in the film. Again, the lead performance is brilliant.

That said, there were a few things about the film that did annoy me. Sometimes the jokes are a bit too wink-wink and shoulder nudging, and I found myself raising an eyebrow a few times. Not really anything to complain about, and maybe some of the laughs were lost in translation, but the majority of the time, I was laughing out loud, which doesn't happen too often for me.

All in all, Fuku-chan of FukuFuku Flats was a sheer delight, kept me laughing, hit me in the fells one good time (or more) and helped me sport a stable grin on my face for nearly an hour and forty-five minutes, and for that feeling alone, I can't help but recommend this film to everyone as humanly possible. You'll walk away feeling refreshed and hopeful, and there aren't many pictures out there to make you feel so bright nowadays. A light in the darkness of typically crappy comedies, this film gets a deserving score. Also, fun fact, Adam Torel is in this picture. Did you spot him? Shouldn't have been too hard, just saying.