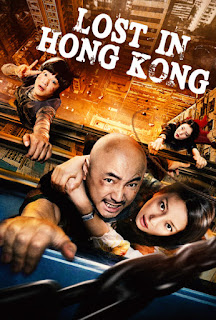 Lost in Thailand was a surprisingly well made comedy, it only got better on repeated viewings, and – perhaps the most important to the studios behind these kinds of films – it made a shit ton of cash. Naturally, that means sequel. So it was up to writer, producer, director, and actor Xu Zheng to make sure that the sequel met all of the expectations to appease fans of the original while adding in a bit of something new to the mix. The results are Lost in Hong Kong, a respectable sequel that desperately tries to recreate the things that worked in Lost in Thailand without actually being a sequel. While there are things that certainly work in the film, it often feels like a faded carbon copy of its predecessor in structure and the new elements at hand in the film don’t quite fit in. While Lost in Hong Kong went on to still make a shit load of cash in China too, it’s hardly as good or as funny as it might have been.

Xu Lai (Xu Zheng) is vacationing in Hong Kong with his adoringly quirky wife (Zhao Wei) and her over bearing family. However, Xu Lai is in something of a midlife crisis and he’s desperate to find his first love (Du Juan), who happens to have an art exhibit in Hong Kong at the time, to see if what he lost decades earlier is something he will want to find again. Unfortunately, his brother-in-law Lala (Bao Bei’er) is tagging along and filming everything as they go…and this only leads to mischief, mayhem, and a potential escape from the police.

Lost in Hong Kong very much tries to replicate the same structure and elements that made Lost in Thailand such a success. The frustrated do-gooder in the lead (played once again by Xu Zheng, although he is a very different character), the kooky side kick that represents as much of a problem as a solution with Bao Bei’er, and a race against time that presents all sorts of hijinks for our two leads to trap themselves with. While there are definitely some funny moments to be had in this, including a very fun sequence where our leads end up chasing one another over a camera and phone that leads to a Police Story inspired bus piece, the film as a whole suffers from being unable to navigate the formula and add in its own slant to separate itself from its predecessor. It goes into the idea of our characters being ‘fish out of water,’ although for most Americans (or anyone outside of Asia) they may not understand some of the jokes about mainland China versus Hong Kong culture and even I seemed confused at a few of these, and it tries to throw the characters into a lot of fairly generic comedic situations. Oh look, he has a helmet stuck on his head and he can’t get it off. Oh look, now they are running from gangs. As a comedy, it lacks a bit of the pizzazz to really carry some of the jokes and it follows the formula a bit too closely to be as fun as it might have.

To be fair, Lost in Hong Kong does attempt to add in a lot of heart and its own slant to the proceedings. Xu Zheng can make some of the ‘dramedy’ elements work and he delivers a performance that carries a lot of the heart of the film. Unfortunately, Bao Bei’er, who is a very talented and very funny actor, lacks the ability to navigate the empathy and heartfelt moments like Wang Baoqiang did in the same basic role in Lost in Thailand, which is overall disappointing and it tends to slow down some of the pacing for the sake of his cartoonish performance. The film also takes an odd shift of tone in the third act as it randomly throws in a corrupt cop sub-plot. This comes to fruition, in a forced manner, to create a finale that’s almost eye-rolling in its heavy handed tension as it takes an action comedy tone. It just doesn’t quite fit in with the ‘mid life crisis’ dramedy that the rest of the film tries to use as its basis and it comes off as more awkward than anything.

For fans of comedy, Lost in Hong Kong might be worth viewing, particularly if you’ve never seen Lost in Thailand since you won’t be comparing the two the entire film. There is definitely some fun sequences and moments to be had here. Xu Zheng is a capable director, writer, and actor and his abilities to craft an impactful film pop up here and there in moments during the film. The rest, however, is a patchy run and the blend of drama and comedy (and the weird action bits of the final act) doesn’t necessarily mix in the ways that Xu Zheng crafted in his debut. All in all, it’s not a bad film, but it’s one that probably won’t be talked about beyond the next few years. My recommendation is to just revisit Lost in Thailand.