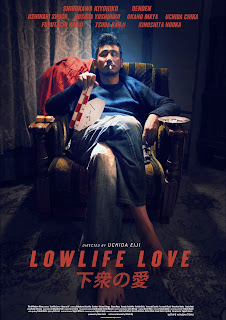 I had the pleasure of seeing an advanced screening of Eiji Uchida's newest film, courtesy of Adam Torel, the producer of the film, almost two months ago. I felt very honored to see it so ahead of time, and didn't really know what to expect going into the film. I had followed its production from the get go. Torel's company, Third Window Films, completely 100% funded this film all on their own, marking TWF's full film produced to call their own, via Kickstarter and various other means of obtaining the funds, including the offing of some of Adam's own personal vinyl collection. Dedication right there. I'm bringing this up prior to reviewing the actual film, because this film was shot so fast and rapidly, that I honestly worry it may not be up to snuff with some other films they've distributed, or Adam's produced previously, or even Uchida's previous work for that matter, Greatful Dead, which I adore, but it quickly washed my worries away, and gladly so. 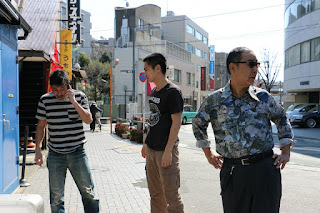 Lowlife Love tells the tale of a piece of shit (can I say that?) man played to sleaze perfection by Kiyohiko Shibukawa (And the Mudships Sail Away), who lives his life sleeping around, and more importantly, wanting to make films as a director. Right from the get go, we learn by the way he acts towards the woman he'd slept with, that he doesn't really care about anyone but himself, and that's what I like most about this work. The characters, more often than not save the rare good-doer, are pretty awful people, trying to scrape by in the film industry, or even get a start in it for that matter. I am an aspiring filmmaker myself, so seeing what they go through and what not, isn't quite how I'd handle things, but I digress.

The movie plays out in a series of vignettes of the man trying to get his script off the ground, going to a scummy producer played by Denden (Cold Fish), for some cash. He, too, is sort of a douche in his own right, and well you are starting to get the picture. The film does have a plot, but the plot is sort of isn't too important. He wants his film made, and will do whatever it takes. What I love about this movie, much like Eiji's previous film, is its characters. I honestly can't remember their names, but I loved the lead, and I really liked his partner in crime, who has quite the hilarious arc, and you really care about them, despite their ignorant choices and ways of handling things. Pretty much everyone around them are all crazy as well, and I loved every twisted moment of it. 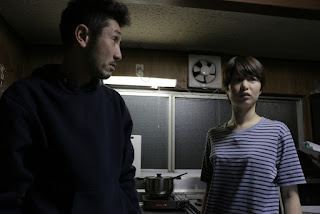 It never ratchets things up to 11 or goes into weird territories as I thought it might have, but rather it sort of works as a character study of sorts, without ever losing sight of being entertainment. It is absolutely hilarious, and has moments you won't soon forget, including a personal favorite bit of mine, involving the lead pouring some coffee after barging in on his sister and friend having some 'friend' time. I honestly still haven't laughed as hard at a movie since I saw this some time ago now. Also, Kanji Furutachi, who previously had a bit role in another Adam Torel produced film, Fuku-chan of FukuFuku Flats, has an equally impressive extended role here (he is in a few scenes), and important to the film's progression later on. He's one of those faces I like seeing crop up on screen.

One of the things I wasn't expecting was the few moments that touched the heart, scattered throughout, and though I won't want to get into any specifics, I will just say there are some nice characters moments that help you seem some ray of light in these otherwise nasty characters. No matter how vile they can be at times, and more often than not, they do mean well in the end, at least some of them, and just want to survive in the dog-eat-dog world of making movies. 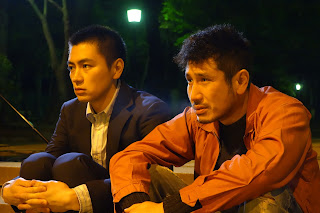 Believe it or not, there are some genuinely
touching moments scattered throughout.

Lowlife Love perfectly blends the blackest of comedy, with a touch of humanity, and a dash of drama, for the perfect blend of cinematic java, that you'll want to come to over and over again. I feel this is a film that will get better with repeated viewings, and is sure to become a cult classic in the Japanese cinema enthusiast community. I really hope to see more films like this come out of Japan in the near future. Maybe this will lead to a wave of more daring films that take risks, no matter the budget. I mean save for Sono, in terms of success more so with his earlier works, we don't have many directors like this working in the area nowadays. Eiji Uchida now has two movies I've seen that I will proudly show off to many a friend for years to come, and has landed himself a spotlight for a director to keep an eye out on. We may be dealing with another cinematic beast from Japan here. Highly recommended.