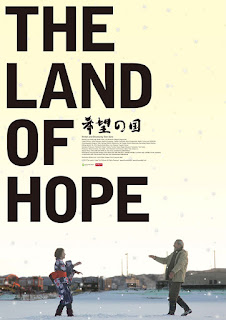 
On March 11th, 2011, a massive earthquake and following tsunami devastated the country of Japan. The entire nation suffered and a large chunk of its citizens continue the suffering caused by nature that very same day. It was a disaster no one expected, and sent shock around the world. Local filmmaker Sion Sono (Cold Fish, Love Exposure), was instantly inspired to make two films from this unfortunate event: Himizu, a more angry film about confused youth in this time, and this film, the quiet, desolate, but slightly hopeful (unavoidable), Land of Hope.

The story here is quite simple. An earthquake happens, causing a nearby nuclear station to explode, thus making the area and it's surrounding areas, inhabitable. The main characters, an elderly couple played wonderfully by Isao Natsuyagi and Naoko Otani, are set in their ways and wish not to move, so much so that they stay put, despite the evacuation line being put right across their front yard. The man is a farmer, and his business is his business, and he intends to keep it that way. The two stay, but their son (Jun Murakami) decides to bounce. The son's wife, played by Sono's wife and muse, Megumi Kagurazaka, nails her performance as usual. Her character finds out she is pregnant, and still staying in the infected zone with her in-laws. 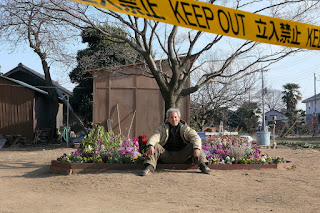 I quite enjoyed this movie. For some weird reason, this and Himizu tend to have a divided audience, no pun intended, of either one loves Land of Hope and hates Himizu, or visa versa. I personally do not understand the debate and division of such preference, as I find the films to be two completely different creatures, both with pros and cons, though both are minor in quantity of said cons. I will speak of what I like about the film first and foremost.

The cast here is excellent and all believable as the family in this dire and awful situation. From the constant bickering, to the more tender and subtle love, they truly give off a realistic family vibe, which is what had to be most believable in this picture, and it really is. As previously stated, the couple is perfect. The more subtle, quiet in nature mother, who wants to remember her youth and passions before the hazards take her into the afterlife, and the husband, a grumpy old pissed-off hoot that you just want to slap at times, but deep down sympathize with and understand his refusal to leave, no matter how crazy it may seem. 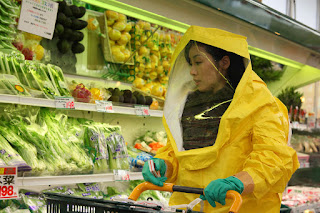 Megumi (above), as praised above, really does quite well in her role. Most of her characters before this that she had played prior to this were really sexual in some way, whether more internal or openly, but none of that either way you view it is present in this film. What we get here is a subtle, but raw realistic portrayal of a woman who wants nothing more to live, and once she is aware, protect her soon to be child. She also sports a pretty dapper hazmat suit, so there is always something to shine on with that in a film.

There are some qualms with this film, though few and far between, and maybe only one to speak of that is worth it. The time. This film is quite long, clocking in at a hefty 134 minutes in total, and I really can see that being a turn off for some people. Now, length of film is in no way a problem for me, as long as it makes since within the context of the film, and to a degree it does here. Destruction, aimless wandering, but sometimes the slow air becomes a little too stale for its own good, and has you wondering when the next fragment of cinematic gold will happen. This guy (Sono) made Love Exposure, which sits in at around 4 hours and keeps you there the whole time, so obviously time isn't an issue, but it has to be done right, and at times this falters a bit within its own rhythms. 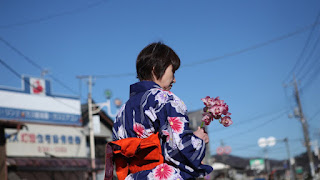 One of Sono's finest.

In the end I found exactly what I was looking for in The Land of Hope, a quality and more quiet film, from a quality and typically loud filmmaker. I cannot complain with his decisions to make this film (+ Himizu) when he did, as an artist often finds inspiration within some of the toughest times, personal or national. The result here in particular is a fantastic film, few issues aside, that has and will stay with me for the remainders of my days as a reminder, it could always be worse, but even when it is, keep true to your nature and carry on. I don't want to get into my personal philosophy and such, but this film speaks to the true nature of human beings, and that is something worthy of praise. Highly recommended.

The Land of Hope is available on blu-ray and dvd courtesy of UK distributor Third Window Films.