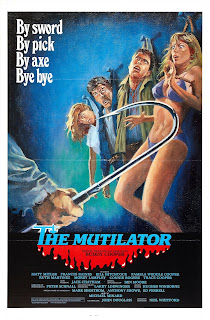 The problem with the success of a certain genre or subgenre is that it tends to saturate a market and when that happens, there tends to be a lot of gems that are overlooked and buried as time passes. When it comes to the slasher boom of the 80s and the advent of home video, there are a ton of buried gems out there. Lucky for those of us who were not old enough to see these films in the 80s, there has been a ‘collector’s boom’ of companies hunting down these lost gems and giving them the ol’ spit shine for cult cinema fans. Late last year, Arrow Video delivered a home run release for the rare slasher Blood Rage and it’s only fitting that they may have topped that release with their latest slasher gem The Mutilator. While the film itself might divide slasher fans with its cheesy elements and formulaic approach, the release itself is locked, loaded, and ready to impress.

Ed (Mitler) and his college friends are asked by Ed’s father, Big Ed (Chatham), to head out to his beach condo to prep it for the winter. It’s fall break, so the group of young adults decide it’s the perfect getaway for the weekend for drinking, fun, and some relaxation. Little do they know that there’s someone already in the condo, someone who is a bit off the rocker, and knows how to use all of the fishing and hunting utensils in the house.

The Mutilator, also known as Fall Break (which is the version you will see on this release since it uses the original title), is not necessarily a slasher that breaks the chains when it comes to the obvious formula it follows. The film does an admirable job at setting up a ton of the tricks and treats that will come later – including how it quite obviously shows the audience every weapon that will be used to slaughter these college kids – but the rather generic characters that are established in the main portion of the film are about as basic as they can get. It doesn’t help when a lot of the acting is horribly hit or miss from all of those involved, outside of perhaps the villain whose brooding presence works like a slasher classic, and it can potentially ruin some of the fun kill sequences that occur. In a lot of ways, The Mutilator is about as slasher as a slasher can get – dumb kids, hulking dark killer, inventive kills, synth score, and a fresh setting. So slasher fans, don’t expect to be thrown for a loop with some big twists or new perspectives because The Mutilator is about delivering the slasher in its most trimmed and slashiest form possible.

So why the love? Why is this film getting such iconic treatment for collectors if it’s just your basic 80s slasher flick? It helps that the film is rare and has earned some kind of cult status for being rare. It also helps that director Buddy Cooper delivers on two things: impressive kill sequences and an odd tongue-in-cheek, self-aware tone to the film. While the kills might have been foretold as the college kids look around the condo, the actual gore effects and the way that Cooper shoots the kill sequences are a blast of great horror moments. There is even one kill with a fishing gaff (big hook) that shocked me and that only adds to the enjoyment of the film. Beyond that, The Mutilator is a film that almost feels like the B-grade elements are intentional versus just being lower quality. This arrives in some of the weirdly placed dialogue, where I expected the character Ed to lean and wink at the camera after he spouts off “I’ve got a bad feeling about this” when the troupe decides to go to the condo, and in how the film will drastically shift tone. The song about fall break seems almost too goody-too-shoes to fit into the movie, there is a scene where one of the characters moves in fast forward as a joke, and the end credits is overlaid with awkward scenes of characters who might randomly break off into laughter or seem perplexed at how long the shot is taking. Combined with how solid Cooper can be at building tension, using shadows, and keeping the audience hooked with the formula, it almost seems intentional that the film plays things on its sleeves so wildly and it had me smiling for the entire film.

While this self-aware tone and solid slasher foundation make The Mutilator a fun watch, it does tend to follow formulas a bit too much to be a truly unique and genre lifting experience. However, it’s obvious that this is a cult classic for a reason and that it’s not some fluke that Arrow Video went to so much effort to release this film in a new 2K restoration with so many very insightful special features (look at that list below – I mean it even includes a full length documentary on the film!) for fans. Truly, if you are a slasher fan or even a fan of cult cinema, this release of The Mutilator is truly a robust and fulfilling experience that even the film has a bit of trouble living up to. This gets a huge recommendation for collectors.