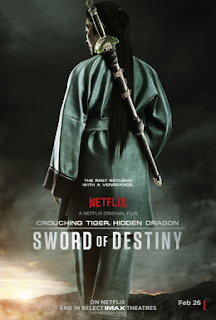 I feel confused. Not because of Crouching Tiger, Hidden Dragon: Sword of Destiny. No, not because of the film itself. I feel confused by the odd series of negative comments, reactions, and reviews to this film. It’s as if fans and non-fans alike had this expectation that this film would be like the first Crouching Tiger, Hidden Dragon. When has a Yuen Woo-Ping film EVER been an arthouse philosophical film maker? It’s almost like there was hate for it before it came out (more on that in a minute) just because “they had the balls to make a sequel.” Well, I guess I’m in the minority. I had a blast watching Sword of Destiny. No, it’s not a spiritual sequel to the original and outside of a handful of references to the original, if you changed the names and just called it Sword of Destiny it could have been just another fun wuxia. This film is far more akin to the Shaw Brothers wuxia films of the late 70s than its predecessor. It’s more Chor Yuen than Ang Lee and not only was I okay with this, I loved it even with some of its obvious faults.

After losing her love, Yu Shu Lien (Michelle Yeoh) somewhat retires and goes into hiding and leaving the martial world. When a father like figure passes though, she decides to come and pay her respects. There she finds a plot by a vicious warlord Hades Dai (Jason Scott Lee) to steal the legendary Green Destiny sword from the fallen hero’s house. She enlists the help of local heroes to protect it including that of a long lost face from her past, Silent Wolf (Donnie Yen).

Perhaps the expectations that Sword of Destiny would be more akin to the original Crouching Tiger are spawned by this ignorance that the original was a norm for wuxia and not the exception. Truly though, Sword of Destiny is much more of a throwback to the wuxia films of the Shaw Brothers era than anything. It’s much more action packed, the characters are a bit more like broad stroke caricatures, and the focus is on a blend of storytelling and entertainment. There are times when I really wanted the film to be about a half hour longer because there wasn’t quite enough time to establish the robust amount of characters in ways that would make their time on screen (and their endings, however they may be) more effective. However, as a classic wuxia fan, this is only par for the course and not necessarily a detriment to the film. In fact, director and legendary action choreographer Yuen Woo-Ping adds in a enough character drama within the wuxia style back stories – including one with new comers Snow Vase and Wei Feng about their birth rights – that I was shocked it was able to add any solid intrigue at all. Yuen Woo-Ping has never been known for his ability to craft dramatic beats, so their inclusion was actually a pleasant surprise. There are issues in the writing, especially with Donnie Yen’s Silent Wolf who is almost too stoic and his “romance” with Yeoh’s Shu Lien is not nearly as effective as one would hope, and it does pull away from the overall quality of Sword of Destiny, but not as much as many other reviewers would have you believe.

Fortunately for martial arts fans, Sword of Destiny has plenty of very memorable fights on display to help out with pacing of its dramatic beats and wuxia epic set up. While Yuen Woo-Ping may not be the director that everyone seems to think he is, he is the action choreographer that set the standard. Whether it’s the sword fights on top of the tiered tower, a fun and ambitious fight on thin ice (in a random wintery setting that pops up), or even a bar brawl to introduce us to the “heroes” being called upon to defend the sword, this film has a lot of great wuxia battles and the blend of choreography and strong style make this film a lot of fun to watch. In this regard Sword of Destiny excels. It’s exciting in its battles with its modern look, but old school tone.

In the end, Sword of Destiny is going to remain a divisive film for fans of the original Crouching Tiger, Hidden Dragon. It’s a different beast. It’s far more of an entertaining romp, harkening back to the style of classic Shaw wuxia versus the arthouse appeal of the original film, with broad stroke characters and more abundant fight work to make it a film that is far more entertaining than it is “good.” For those with the right expectations, it’s a blast filled with fun set pieces, dynamic martial arts action, and plenty of characters to have fun with. I might be in the minority, but Sword of Destiny is a great little throwback wuxia flick. Go in with the right expectations and have fun with it.

Written By Matt Reifschneider
Posted by DarkReif at 2:24 PM