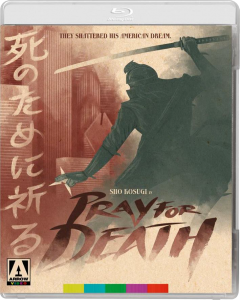 For cult film fanatics, there is an almost sacred place for the ninja movie boom of the 80s that will never be touched. In a way, this dedication to what results as a ton of mediocre B-movies is a special one that the films cater themselves towards. The recent re-release of the Sho Kosugi ‘classic’ Pray for Death by Arrow Video showcases this concept in full. Nothing about Pray for Death is all that special, nor is the film actually all that good even. It’s generic in many ways and yet the film knows that it is this way and it plays up its camp to some oddly serious levels which  in turn feeds right into the fan base for these kinds of films. As a film, Pray for Death rarely inspires awe (of the good or bad kind) and plays things in the most 80s-hollywood-interpretation of a ninja film as possible. Which, in its own way, is ridiculously charming in true B-movie fashion. As a fan of these kinds of movies, it’s hard to say that I didn’t enjoy every minute of the film, warts and all.

Akira (Kosugi) and his family have decided to move to America, where they can build their own business and live out their own personal American dream. Unfortunately, the property that they have purchased happens to be the trading ground for some evil white collar American scumbags and when some heisted jewelry goes missing, they have Akira and his family in their sights.

Pray for Death starts off with some classic ninja action. A black clad ninja fights off a slew of other ninja in a forested ground with swords, stars, flips, and general tongue in cheek glory. However, don’t be fooled as this is perhaps the only traditional ninja sequence in the film and it happens to be a TV show that Akira’s kids (both are played by Sho Kosugi’s real sons) worship. The film then takes a more general action oriented tone – outside of a flashback of Akira’s past and a fun little duel he has will his master – that might be more akin to something Cannon would have released at this time. This is, in essence, part of the film’s B-movie charm. It’s a low budget, action oriented flick that spends less time developing real plot and instead just goes for the Cannon formula of a wronged man, corrupt baddies, revenge and a spectacular body count. Just with ninja aesthetics. The action is pretty diverse with plenty of ninja slaughtering that happens in the finale and a few fun chase sequences in the second act that feature randomly exploding vehicles and some fun ninja traps. Action fans will dig right in. The budget occasionally hurts the film though (and Kosugi’s stunt double is horrendously obvious at times) and it can hinder the overall tone, but it comes with the territory and it rarely pulled me out of my enjoyment of watching Sho Kosugi take on the corruption with ninja style.

One aspect that’s unique to this latest release of the film from Arrow Video is that it features both the R-rated and Unrated versions of the film. The unrated version, complete with more violence, gore, and nudity (which is obvious to spot due to stark film quality shifts) takes the film down into darker alleys which adds to the experience of the film. Sho Kosugi always has a charismatic and intense screen presence that carries the film, but there are a few deaths and plot twists that really add a serious and often drastic tone to what might be a silly film. It makes Pray for Death feel a bit uneven as it can’t quite balance the dark elements with the humor and family friendly pieces (there is a scene where his son has to fight off some bad guys with a rigged bicycle that could have come straight from 3 Ninjas or The Goonies), so keep that in mind when going into the film too that it can shift on the fly into different tones.

Despite its obvious flaws and fairly generic narrative, it’s hard not to love Pray for Death for playing into its own elements. At one point, one of Akira’s sons makes a comment about how the detective in charge of investigating the crimes must watch too many ninja movies. This is simply inherent of what Pray for Death is about: it’s serious enough to hold its own with the darker elements, but has a playful tone that consistently reminds the viewer that this is an 80s ninja film and should be viewed as such. It’s rarely a perfect film, but I was perfectly okay with its Cannon like approach to action and entertainment.