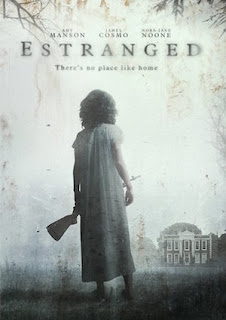 If there is any genre that’s the most formulaic in its attempts to “trick” its audience than the psychological horror flick, I’m not so sure what it is. Whether it’s supernatural in essence or more of a grounded thriller, the psychological horror film is one that I immediately go into looking for the hook. When it comes to Estranged, I went into the film looking for a hook, but the film was executed so strongly that I ceased to solely look for clues and allowed the film to take me for the ride which was ultimately the best way to go into it. Estranged is atmospherically thick, brutal at times, and it unfolds in some great ways that showcase a style that’s an interesting mix of 70s horror in the vein of Polanski, but with a decidedly modern edge to it. The twist didn’t need to hook me, I was already hooked.

January (Manson) and her boyfriend Callum (Quarterman) were in a bad accident in Rio that leaves January with significant amnesia and limited use of her legs. With nowhere else to go, they return to January’s home – a home she hasn’t seen in six years and has no memory of leaving. They are greeted by a rather odd family and a house that seems to be starting to run down…but things are off. Her family seems to hide a secret and she needs to remember before things spiral out of control.

When Estranged started, the gimmick of amnesia and limited leg use for our main heroine January seemed a bit overzealous. Luckily, the film has no intension of running with these plot conveniences in the normal B-thriller ways. Instead Estranged throws the audience into the mystery almost immediately. It limits the ‘trick’ flashbacks to blurs and builds the tension with character interaction and acting instead of big plot twists. This approach is what gives the film a slightly older tone that feels like it was inspired by the works of Polanski in its concept versus going for the hook of modern psychological thrillers. The atmosphere is key and the rest of the film is dedicated to just that means. Dialogue is kept vague and purposefully awkward, the acting performances would indicate everyone has something to hide, and the use of the isolated house makes for some deliciously suffocating moments. It would seem the only person that is being upfront in the first act is January’s boyfriend, who is left to his own unique plot maneuvering by the second act in some off setting ways.

From there though, Estranged does take a rather modern spin to its classic foundations. The last act, if not the entire last half, is built on us knowing the “big twist” of the plotting because it happens about half way through the film instead of during the third act at some point. From there it takes a modern and brutal path that seems more akin to the extreme French horror films that spawned classics like Martyrs and Them instead of the 70s atmospheric horror it starts off as. It might have been nice for the film to drag out the suspense of the first half a bit more, considering director Adam Levins accomplishes it so effectively, but the maneuvering into the horror realms isn’t a misguided one. If anything, the reveal at the half way point and its shift makes it almost more disturbing and shakes the viewer a bit harder than it might have coming in the third act.

My apologies if this review seems a bit vague, but going into Estranged somewhat blind to the plot progressions, narrative, and characters beats is what makes this movie work so well and more so than just blurting out the twist…which isn’t all that twisty. The ride that makes this psychological horror tick is just that: the experience of the atmospheric shifts and tonal beats as a blends that 70s aura with brutal modern horror elements. Estranged might be a bit too slow for some and it pulls away from going all out with its scares and replaces it with unnerving concepts, but it works in some shockingly effective ways making it the first bright underground gem of horror in 2016.