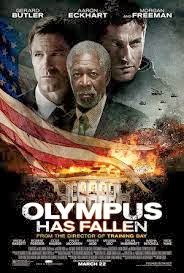 While 2013 has brought about plenty of odd things from Hollywood, perhaps one of the most intriguing was the fact that we received two "Die Hard" in a White House films...and neither one was an Asylum film. While I missed "Olympus Has Fallen" in theaters, I did see the other film, "White House Down," first so it's hard not to make comparisons. I'll do my best to focus on "Olympus Has Fallen" even if the two films are remarkably similar. On its own, "Olympus" is a fun and brutal film. Even if it's an essentially formulaic and rather silly film overall, it overcomes its own pitfalls with 80s style violent action charm.

As a long time action film fanatic, the premise of "Olympus" is about as predictable as they come for a film like this. Would anyone question whether our hero, played with a delightful amount of ham by the shouty Gerard Butler, would not succeed? Even from the beginning with his guilty "I'm a fuck up why can't people love me" backstory about his previous life as head of the President's Secret Service, it's obvious that they mean for us to rarely, if ever, question his success rate. They even stack him against some ridiculous odds to fake us out. A North Korean terrorist group lead by a highly trained (and martial arts trained) terrorist mastermind, played with a bit of smarm by Rick Yune in a sort of upgraded form of his character in James Bond's "Die Another Day," take a villainous run and overthrow the White House. Even if it's laughably outrageous in concept that they could invade and take over the White House, Yune is a great counterbalance to Butler. The film might be formulaic in this 'good guy rising to meet the challenge' versus 'powerful mastermind villain' and with its plot progressions, but like the action films of the 80s it's still a blast to follow.

There are a couple reasons that the rather silly plot can be overlooked too. Firstly, the casting is fun. While Morgan Freeman and Aaron Eckhart might be glorified cameos overall, it adds to the overly ridiculous vibe of the film and they support Butler's cheesy action hero enough to make it work. Secondly, director Antoine Fuqua, despite his history of doing dark and intense thrillers, seems to embrace the over the top aspects of the film while retaining the dark streaks in the film. He keeps the action in the forefront, takes the violence to the R rated limit, and keeps the pacing brisk. Hell, he even allows the handful of great B-action one-liners (including, but not limited to something like this: "Why don't you and I play a game of fuck off. You go first.") to slip through. I've always been a fan of Antoine Fuqua, but "Olympus Has Fallen" might end up being my favorite film of his.

While the film does tend to cater to its masculine audience with outrageous standards, it's a film like "Olympus Has Fallen" that at least knows what it is and runs with it. It's designed to appeal to those fans of 80s action films of larger than life heroes and despicable villains that do unthinkable acts. If you are not a fan of those kinds of films, then I suggest skipping out...but if you love them, like I do, then "Olympus Has Fallen" is another great addition to the second golden age of action films.