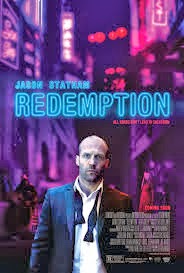 It's funny that the US is so deathly afraid of Jason Statham doing anything other than action. It would seem that if he does a film that's too much drama or too much thriller, it's instantly shot into straight to DVD territory. It happened with the great cop thriller "Blitz" and it happened again with "Redemption." While this film tends to find itself stuck in that awkward state of being too dramatic for action fans and catering towards too much action to be truly considered a drama, "Redemption" is something of an intriguing watch if only for a few strong elements that raise it above being your typical straight to home video fodder.

Jason Statham, in perhaps one of his strongest performances yet, turns in as Joe Smith, a solider surviving under the radar trying to escape his past and a court martial as a homeless man on the streets of London. After he stumbles into the apartment of a rich man who plans to be gone for most of the year, he decides to take this as an opportunity to right the many wrongs of his life and to get back on track...taking a path that his past might have made too easy for him.

There are a lot of unusual aspects to "Redemption" worth noting in a review. Firstly, this is the first directorial effort of long time writer Steven Knight. This man has given us the scripts to some extraordinary films like "Eastern Promises" and while "Redemption" isn't quite up to par with something of that caliber, the style remains intact both in writing and in his directorial choices. So let's start with his writing first.

The film has a winding sort of character driven story that essentially deals with two protagonists (Statham's Joe as the main portion, but with a good deal of time delivered to his nun friend Cristina too) who find themselves having a bit of a 'crazy patch' in their lives. While both have very intriguing plots going and how they interweave as we look at the state of redemption in a modern world, "Redemption" does tend to find itself lacking focus at time. Joe finds himself working as a hitter for a Chinese gang in the first half, but it's dropped essentially in the second to focus on his relationship with Cristina for example. The obvious focus of "Redemption" is the characters growth and arcs, which are both subtle and dramatic enough to raise plenty of moral questions in the viewer, but the plot itself tends to take second fiddle to the characters and visuals...which tends to leave things a bit up in the air by the end of the film.

That being said, Knight seems quite adept in the directorial chair. He pulls some stunning performances from all of his actors, including Statham who delivers a few knock out moments himself...not with his firsts or massive forehead, and that combined with some beautiful neon lit nights in the big town of London make for a backdrop worthy of implanting these flawed characters striving to make the best of the circumstances in a modern world. Knight also seems quite capable of handling the handful of action sequences that arise in his tale of Joe's rise and fall. Statham is known for his strong screen presence and stunning action work, so its no shame that Knight and company decide to throw in a few brawls to keep the pacing up and they come off as well placed and even better shot. Let's be honest, it's simply not a Statham movie unless he does something ridiculous like threaten to kill a man with a spoon or throw someone off of a roof and "Redemption" delivers on that aspect too.

"Redemption" is the kind of film that will probably find its audience down the road as it begins to work its way into a cult status. It's not a perfect film as the blend of genres tends to be a bit fuzzy and Knight's writing could have used some trimming, but "Redemption" delivered on most of its high end promises of strong dramatic tension and the occasional Statham throw down. In the end, this dramatic action film comes off as a pleasant surprise and one that will probably earn a few more watches as I dig deeper into the moral dilemmas and characters presented. It's not for everyone, but its worth the watch anyway.