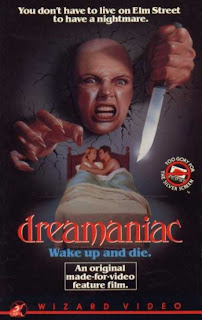 
There is a terrible stigma carried with the phrase “direct-to-video” today which is usually synonymous with cheap and all around shitty filmmaking. This of course is not always the case but happens to be true more often than not. Back in the mid-80s however the term “direct-to-video” was worn as a badge of honor, with DTV films proudly proclaiming on their video box artwork that they were “too gory for the silver screen” and other bullshit statements of the sort. This of course was far from the truth as they were no gorier than their theatrical counterparts and, much like today’s oversaturated DTV film market, were just as shitty and cheap. 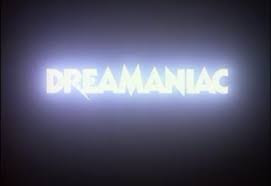 With the tagline “You don’t have to go to Elm Street to have a nightmare” it’s obvious this forgettable feature is a rip-off of Wes Craven’s ground-breaking film "A Nightmare on Elm Street". We have a heavy metal musician that dabbles in Satanism (though I question him being a ‘heavy metal’ musician we are introduced to him wearing a Def Leppard shirt… come on man! Display some SLAYER!). He summons a succubus who haunts his dreams, which is according to a character in the film, is a female demon that fucks men and then kills them but not always in that order. The succubus shows up at a party later and one-by-one starts killing all the teenagers, virgins and sluts alike. 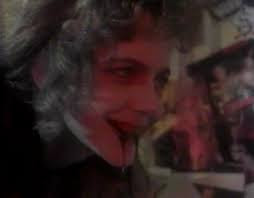 “Dreamaniac” opens with what is possibly the slowest and most boring opening credits ever no doubt drug out to get the film over the 75 minute mark. After the dreadfully slow opening credits slasher fans are then graced with a dreadfully slow film with only a few bloody kills to break-up the tedium.  Everything else is absolutely the lowest common-denominator of filmmaking with cheapjack lighting and directing and porn-level acting. All this is wrapped up with a cop-out ending that that will ensure to make the viewer face palm their head so hard they might die of a skull fracture. 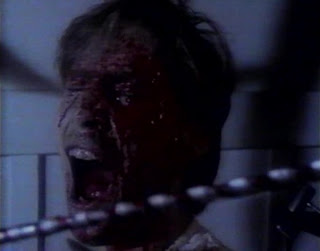 “Dreamaniac” was made at the height of the home video craze and it served its purpose at the time by giving slasher film fanatics a little more blood in their diet.  Today, however, there is absolutely nothing about the film to make it worth digging up.  This is not a “lost” gem by any means as the tedious pacing overall cheap filmmaking makes many of today’s direct-to-video slasher’s look like gold in comparison. I can only recommend this film to collectors of slashers of the golden age otherwise one is better off re-watching “Nightmare on Elm Street 5” instead. Seriously, “Nightmare 5” is better than this! The back of the box artwork even goes as far to claim "makes Freddy look like a bargain basement boogeyman". In the words of my brother "leave it to a bargain basement knock off to make that claim".


Posted by Cronosmantas at 2:25 PM