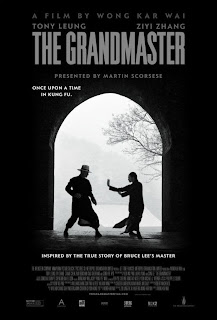 While the trend to pump out as many Ip Man films as possible continues to flood the market (thanks mostly to the Wilson Yip/Donnie Yen combo of films that took the world by storm), this latest incarnation seems to be the most intriguing. "The Grandmaster" has already seen numerous different cuts of the film and it's the first Ip Man film to see serious wide distribution in theaters in the US. That's right. A theatrical release in over 700 theaters. While I found the film to be disappointing overall, it's still easy to praise "The Grandmaster" for what it does right even if it's far from the film that deserved this honor of a major theatrical release in the US.

While "The Grandmaster" has earned its fair share of stellar reviews from various sources of merit, I'm not one that normally looks to those sites and magazines for opinions on martial arts films to be honest, I still had high hopes for it. Wong Kar Kai is a phenomenal director, Tony Leung and Zhang Ziyi are astounding actors, and Yuen Woo Ping is damn near a grandmaster himself when it comes to kung fu choreography. This film had a lot going for it. So to say that I came out rather confused and irritated says something...

Granted, Wong Kar Kai knows how to make the small details grand and this helps "The Grandmaster" reach that level of artistry that most of the other Ip Man based films haven't reached. He uses lots of subtle character moments to keep the audience interested and his eye for striking dramatic visuals make for some dynamic elements that bring Yuen Woo Ping's choreography to life. What I didn't like about "The Grandmaster" was the relatively disjointed process that it goes about showing us the middle years of Ip Man. The film can be divided into essentially two segments. The first third of the film is a stellar martial arts piece, focusing on the heart and soul of why martial arts was so important to Chinese culture even in the wake of shifting world of the 1930s. It has relentless fight bursts that really delve into each style and relevance to each character. While Wong Kar Kai's use of slow motion is epic, it does grate down on you after a while even here and was essentially the only complaint I had about this first third. Except for perhaps an ill used cameo by Cung Le in the rain fight...but we can't have everything can we.

From there the film takes a turn for the super dramatic and often too artsy path. The rest of the film sort of blinks in and out of Ip Man's life giving us little glimpses into mere moments. While it's an artistic choice to do so to cover more ground by the director and writers, it also happens to be a bit schizophrenic in the overall storytelling abilities. Secondary characters like the assassin Razor or the villainous Ma San become after thoughts of the style and major moments in Ip Man's life (like moving to Hong Kong and leaving his family) feel like random blurbs via Twitter with no effect on his overall character. Even our leading lady Gong Er, played with strong finesse by Zhang Ziyi, seems to become something of a half thought as the film rolls on never quite reaching that emotional connection needed for me to give two shits about her character's existence or fate. "The Grandmaster" just sort of meanders around giving us art focused moments, but no cohesion to the rhyme or reason of it all only to end on a rather cheesy note.

While I do have to give the film a bit of benefit of the doubt considering I saw a cut with 22 minutes missing from the Chinese version, it's hard for me to fully recommend this film to those looking for a truly inspired martial arts picture. When it's on the mark, boy oh boy is "The Grandmaster" a beautiful film to behold, but after the first 20 minutes the jumbled flow undermines any greater feelings or attachment I should have held and it sort of fades from memory. I'm sure there are going to be some of those artsy-fartsy fans out there that can't get enough of reading into the edits and the wording of the massive amounts of title cards that had to explain to the audience what was actually happening outside of this atmosphere driven coughs, but don't count me in that boat. A potentially heroic film simply can't find its own foundations in an overzealous work of fancy...and it's simply disappointing.