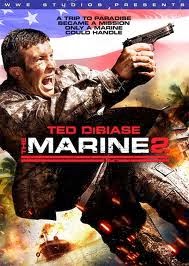 By watching this franchise backwards and starting with the third film in a silly attempt to increase the quality of each successive entry, I sure as hell didn't expect what I got with "The Marine 2." To be perfectly honest about all of the talk of 'vulgar auteurism' that has been circulating the movie interwebz, director Roel Reine's name has popped up more than a few times. Since I'm only familiar with his work on "Death Race 2" and "3," my hopes for this film being one of the great 'straight to home video' action gems was rather low. It just shows you what I know because "The Marine 2" might be big, dumb, and ultimately a low budget straight to home video actioner, but Reine injects enough charm and clever energy to lift it above the terrible film it had every right to be.

A Marine sniper Joe (DiBiase) has finally earned his time at home and his successful wife (Cox) has just the treat for him - an all expense paid trip so she can do some marketing and assisting to an asshole millionaire on his new island resort. While his adjustment back to 'real life' is a little tough, his training is going to come in handy when a group of militant terrorists take over the island and hold everyone hostage. The police seem ineffective so its up to Joe to sneak in, kill some baddies, and save the hostages before the situation gets out of hand.

I'm sure that it helps that my expectations where so low for "The Marine 2." The third film, although not without its fun moments, was generally speaking - a terrible film. With Reine behind the lens and another WWE superstar wrestler I've never heard of doing his best 'everyman' impression, it's hard to say that I had anything higher then the lowest of expectations. Yet, here we are talking about a movie that, by all means, should have been horrendous and remarkably isn't.

"The Marine 2" is certainly not a great film. The plot is another formulaic "Die Hard" on an island clone, DiBiase Jr. is wooden in the lead with little to no character writing to help, and the additional 'plot twists' that it springs are generic and unsurprising. The script to this film felt like something that was cooked up in a few minutes and the writing for the dialogue and characters only supports that claim. The foundational elements of "The Marine 2" are boring and formulaic while most of our cast sleep walks through the film. Well... outside of Michael Rooker as the ex-powder monkey friend who eats up the scenery like the great cult actor he is. He's a life saver in many scenes for this film. The terrorists are not all that terrifying, their motivations are often half thought through, and the various betrayals and side switching that come with these kinds of films are either completely out of the blue or terribly obvious. On paper, "The Marine 2" is the kind of film that should have never been green lit.

Yet, it's hard for me to say that I wasn't entertained by "The Marine 2." If there is one that that Reine does is that he makes the B-grade elements stomach-able with strong pacing and fun action. This is the highlight of this film. While the dialogue and characters might be grating, Reine seems to understand that and only gives us just enough to get us to the next action sequence. These action sequences are surprisingly solid and fun to watch. A brutal fight fight sequence has an unedited sweeping shot that spins around the fighters utilizing DiBiase's obvious strengths as a screen fighter to maximum effect, there is a night raid of gun fire and a Jeep escape that's charming to watch, and the finale, despite taking its sweet time and lacking logic, as a great final fight on a dock that earns the film some merit as a low budget actioner.

"The Marine 2" is mostly going to be for WWE and B-level action fans to begin with, so don't mistake my bits of praise as anything but acknowledgment that this film caters to its audience. So if you fall into either of those two categories, then I highly suggest looking into this film for a fun little escape from big budget spectacle. It might not be great on anything beyond the action sequences, but those are enough to make it a leap of quality over the terrible third film.