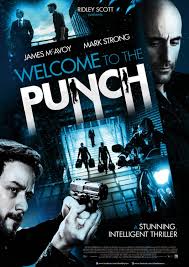 Sometimes the Hollywood movie machine confuses me. Well, most of the time. What kinds of film get chosen for theatrical distribution can be something of a rat race and it leaves certain films to sort of suffer and fall into the dreaded “straight to home video” category. Take “Welcome To The Punch” as a prime example. Two major British stars in McAvoy and Mark Strong and produced by none other then Ridley Scott. It’s understandable why this film didn’t get more coverage in the US in many ways, but with this kind of draw it should have had a much better limited release. Yet, here we are with a decent little thriller getting the same kind of treatment “Two-Headed Shark” gets. It’s simply not fair for a solid film like this.

So why should a film like “Welcome To The Punch” get better treatment? For a thriller, this film has a lot more balls then most of the generic pieces of waste that grace the genre. In an odd way, “Welcome To The Punch” is a mixture of European style modern thriller and an old school 80s Hong Kong gun fu flick. It’s less artsy than the theatrical flop and oh so very awesome “Dead Man Down,” but it’s still a fun and spirited film that had me going the entire time with its “whodunit” mysteries and dark characters.

“Welcome To The Punch” starts off as a fairly standard cops and robbers affair. Obsessed cop Max Lewinsky, played with nice dark streak by James McAvoy, fails to capture his criminal nemesis and gets his knee blown out in the process. Not only does the knee never heal properly, but neither does his pissed off psyche which while fairly one toned here, McAvoy ably handles. The film changes tone at this point to dive into the more standard murder mystery thriller when a young man perishes from a gunshot wound and McAvoy and his new partner are tagged to the case. As it turns out, this kid is the son of his evil criminal nemesis Sternwood, who storms in with icy glares and strong subtlety, and both of them are looking to find out who – and more importantly, why – this crime was committed. Shit turns south and soon the two find themselves playing for the same side and the rules don’t count.

Writer/director Eran Creevy seems to understand why thrillers work and he makes “Welcome To The Punch” follow the formula fairly closely. Dark, flawed characters make up a majority of the film and the plot seems fairly standard as conspiracies arise and the body count rises. To be honest, while the plot was decent, it’s far from being truly smart or all that clever. The characters tend to be the reason to keep interested.

From there though, Creevy executes to fairly high standard. He has a slick modern visual style, even if the gray toned color palette rarely thrills, and its obvious that he has an eye to keep a film like this entertaining. The production values are solid and help the film raise itself above mediocre and there is enough action sequences that action fan in my was surprised. I’m sure by now, dear readers, which you are wondering where my claim of Hong Kong gun fu influence comes in. This is where it resides. Visually, Creevy establishes a strong John Woo influence and there are a couple of action set pieces, in particular a shoot out in an abandoned club, which glows of gun fu worship. Hell, even the concept of a remorseful killer and a rogue cop teaming up owes a good portion of its foundations to “The Killer.” It’s this Hong Kong inspired dressing that truly made “Welcome To The Punch” worth the time watching.

While the film definitely has its flaws in the formulaic presentation, oddly added subplots (including an off kilter romantic one that seems to pop up out of nowhere), and two color characters, I have to still say that “Welcome To The Punch” was a solid and entertaining film. It has a slew of charm under its belt, a strong director with visual flair, and enough of “The Killer” that fans will immediately recognize the style. It’s not a thriller for everyone, but it’s a fine worth the purchase.