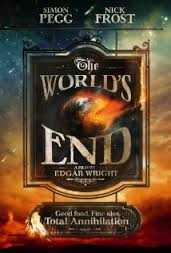 Well it’s finally the end, “The World’s End” that is and the end of Edgar Wright’s three flavors Cornetto trilogy. It’s been awhile since “Hot Fuzz” came out in 2007 but we are finally treated with the flawless chemistry between Nick Frost and Simon Pegg and Edgar Wright in the director’s chair for at least one last time. Except there is already one big difference; the role reversals of our two leads. While Nick Frost usually plays the bumbling idiot, he is the reasonable character in this film. This makes for a nice switcheroo, separating the final film with the previous two. Being all comedy films, the Cornetto trilogy are all different flavors of genre. “Shaun of the Dead” is with zombie/horror, “Hot Fuzz” with action, and “The World’s End” actually fitting elements of both with sc-fi. But the question is can “The World’s End” live up to its two predecessors? Given the theater’s response, the answer is definitely yes.

“The World’s End” revolves around Gary King and his “entourage” of old high school friends when he decides to finish off a bar crawl that was never completed twenty years ago. King has never left those days, being a broke and chronic alcoholic with a “not a care in the world” attitude. He contacts all four of his friends which have established decent lives for themselves and ruses them all to attend, especially the one that gave up on drinking, Andy Knightley (played by Nick Frost). After plainly manipulating him and lying to him, King convinces his toughest opponent and the pub crawl is underway. They must make their way to twelve different pubs in order to finish the pub crawl with the last one being the film’s title which also fits the description of the film purposely. Just as things seem to be ending early with the others, most notably Andy, with Gary’s irrational behavior, the town’s secret reveals itself in the men’s washroom and things start to get even more interesting. Our unlikely heroes have to overcome a town full of robot replacements (much like “Invasion of the Body Snatchers”) being run by aliens before it is truly the world’s end. 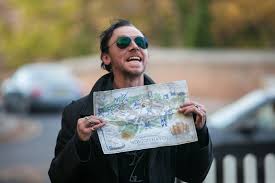 Much like the two previous films, our third entry doesn’t fail to deliver some excellent humor which shows its head in two ways; through dialogue and physical comedy. The dialogue is excellent, though at times fast paced, so this isn’t a lazy popcorn film at all which definitely gives it more merit. As a matter of fact, he seems to even steal the show at times. When the action kicks in, it’s absolutely a wonderful treat. The amount of dedication from cast and crew in these scenes is clearly there with everyone seemingly having to learn very impressive choreography and pulling it off flawlessly, especially Nick Frost whose character has his head on straight for a change. The film was actually under supervision of stunt coordinator Brad Allen, the only non-Asian to ever make it in Jackie Chan’s stunt crew, so the amazing work definitely shows. Given all of the film’s merits, there is however one thing that did get on my nerves; Gary King. Unlike the last two films where Simon Pegg plays a more straight character, Gary King is basically an immature adult teenager and while I understand his fitting into the film, he just got a tad on my nerves a few times. I’m not a fan of overly obnoxious characters, and oh boy is he ever obnoxious. Of course, having to feel this way is probably the point, but I felt it was just a little bit of overkill. The ending of the film is way more ambitious than anything in the last two and bares its teeth showing off the film’s budget which is definitely way larger than “Shaun of the Dead” or “Hot Fuzz.” I wasn’t big on the choice of ending, but everyone is going to have their preferences. 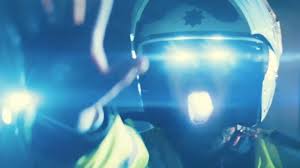 What makes the Cornetto trilogy stand out among the crowd is that it is absolute proof that a bigger budget does not equal a better movie. With the films growing in budget however, Edgar Wright shows that bigger productions are no problem for him as he can handle quite anything. Not only is the cast always exceptional, but the crew is also. What makes the films great in this trilogy is the excellent execution of all genres involved. It’s a comedic genre trilogy and each one is embraced. These are films made by fans for fans and the dedication is truly apparent. Even though I might favor “The World’s End” less than “Hot Fuzz” and “Shaun of the Dead,” it is still an excellent film that definitely deserves the praise. If only a huge bulk of Hollywood could take notes from these films, as we find our popcorn entertainment going a little stale. Edgar, Simon, and Nick, thanks for the ride. It was a good one.

Written By Elise Holmes
Of
Ramblings Of A Deadite
Posted by DarkReif at 9:29 PM