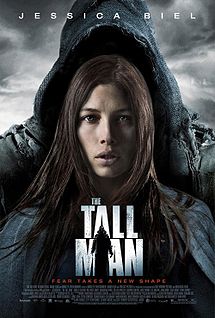 Even with many reviews claiming "The Tall Man" to be more of a dramatic thriller, I must not have believed it. How could the long awaited follow up to "Martyrs" by director Pascal Laugier not follow in the same horror style that he basically perfected? Yet, that is exactly how "The Tall Man" plays out. Even though this film could have taken a more ventured and by-the-numbers horror focused road, it instead bides to twist and turn with dramatic effects and plays on the expectations of the viewer. Unfortunately, despite my respect for gunning in some unusual directions, the results of it are a mixed bag. "The Tall Man" is meticulously executed at times, but its end game comes off as muddled in narrative and oddly structured.

In a small town in Washington, there has been a odd turn of events in the last few years. A slew of children have gone missing, one after another, and rumors of a mysterious 'tall man' have been at the heart of the events. Even local nurse Julia (Biel) finds her skepticism of the subject waning. And she doesn't fully believe until her own son is taken by a mysteriously cloaked figure. Now its up to her to find out just who this Tall Man is and what his agenda is with all of these children.

Pardon me if you find my review to be the a little vague in the details. Truth be told, despite my mixed feelings on "The Tall Man" the film unfolds in some very odd and surprising ways and I would hate myself to spoil any of its twists to you. I would argue that it's these inventive and often smartly written twists that are the highlight of "The Tall Man". It has you looking one direction and then moves in another with its characters and how it plays out. It almost toys with the viewer in how it does it. This is the true highlight of the film and one that I suggest fans of unique film making look into.

Many of the problems with "The Tall Man" stem from its focuses on twists. The basic plot sounds like a great scary time, but when done in a more dramatic thriller it almost feels like a Lifetime movie. An artistic one with some great performances, but a Lifetime movie nonetheless. And the structure itself is a bit baffling. As most films do, this one structures itself around the twists and the really clever twist comes at the halfway point of the film. The halfway point, you ask? Yes. Smack dab in the middle of the film we are nailed with a great twist and the film never can live up to that moment after that. In fact, it sort of drags on as Jessica Biel's character takes a back seat in the third act to focus on a young girl from the town and her obsession with finding the truth. Now both Biel and this young girl, ably portrayed by Jodelle Ferland, eat up the scenery they are in with vigor and strong emotional acting - but the story narrative often negates some of this in favor of the twists. Not the best choices perhaps.

If you have seen "Martyrs" (and if not then I suggest you do so immediately), you already know that director Pascal Laugier loves to mess with your expectations for a film and the general narrative. Visually he ably pulls some solid tension and artistic merit into this film including a very intense chase sequence with a flipping van and everything, but with "The Tall Man" he embraces a sense of mystery and film structure undermines the experience rather than injecting it with fresh vision. A disappointing turn of events for a director that I had significantly high hopes for in his career.

"The Tall Man" was most definitely a surprise film for me. It has a bitchin awesome twist half way through the film, the visuals are strong, and the acting superb. Unfortunately, the concept degrades into something one would see on television and the structure will leave one scratching their head in confusion. Although there are those things to love about "The Tall Man", I have to say that this was a massive miss for director Laugier and one that is sure to disappoint many of his fans.

Want to try your hand at "The Tall Man" and see if you are one of the ones that love it? Click on the links below to pick up your copy now!