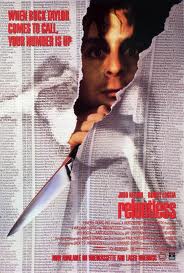 
William Lustig is a big name in the cult film world. Not only has he directed classics like “Maniac”, “Vigilante” and “Maniac Cop”, but he also founded Blue-Underground Entertainment, a company specializing in releasing cult films on the home video market in quality editions. Seriously this guy bleeds “Kvlt”. In the late 80s, like most directors that got their start in the cult film circuit, Lustig gave a stab at the mainstream market by directing two films, “Relentless” and “Hit List” for Cinetel films. Though at the time more people saw these films than his earlier efforts, today they are the forgotten entries into his filmography due to the fact they lack the eccentricities and bombastic approaches to violence and gore that fans praise his earlier efforts for.

The plot is a pretty standard “killer on the loose” connect-the-dots formula. We have a brash young rookie detective (Leo Rossi, whom fans may remember for playing the jackass paramedic in the original “Halloween II”) teaming up with an indifferent veteran (Robert Loggia) in order to catch a serial killer with daddy issues (Judd Nelson) whom kills his victims by having their own hands do the dirty deed. The audience can predict every turn in the plot, especially when the killer gets personal with detective Dietz’s family.

William Lustig has always managed to acquire dynamic cast members and “Relentless” is no different. Judd Nelson makes a memorable portrayal as our killer, Loggia is likeable as ever and Meg Foster delivers as the detective’s wife. Relatively unknown actor Leo Rossi surprisingly makes what would be a rather routine detective character engaging with his arrogant Brooklyn heritage. Rossi makes the character flawed and with that more interesting. I really wanted this guy to blow our creepo away!

Though the cast is good, what makes “Relentless” really stand out is the keen eye for style provided by Lustig as he makes the film look better than it really is. Even with his style one can tell Lustig is being subdued no doubt due to pressure by the producers trying to make a marketable film as it just lacks the trademark gore and violence that punctuated all of his notable efforts before. I just wanted the film to be more graphic, to go the extra mile that fans have come to expect from Lustig. Even the trademark Lustig extreme stunts are kept to a minimum with a high speed race home being the highlight

“Relentless” on the surface is just another “to catch a killer” film as the plot has nothing really special to set it apart from other films in the genre but Lustig’s stylish directing and the strong cast makes it worth a watch, especially for Lustig fans. Despite it’s routine plot and toned down “play it safe” kills, “Relentless” was a massive hit on home video following it’s short theatrical release and gave rise to three sequels. That in itself is a feat not many films are able to succeed at.