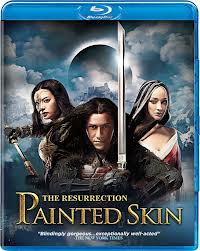 Although I have yet to see the first "Painted Skin" film from 2008, the epic natured sequel perked my interest with a trailer containing strong visual flair. Normally films of this nature (fantasy focused martial arts/dramas) rarely interest me outside of some of the technical aspects, but as soon as I started "Painted Skin: The Resurrection" I was engulfed. The film might be uproariously over the top with its Shakespearean tale destiny, love, and loyalty and distinctly unrealistic with its demon fronted fantasy elements, but dammit I was totally along for the ride. If you are not willing to set aside your disbeliefs then "The Resurrection" is going to have you throwing a temper tantrum on the carpet. If you are though...its one hell of a ride.

When a Fox Demon Xiaowei (Xun Zhou) in broken free from her icy prison by a fellow blossoming demon, she quests out devouring men's hearts looking for her chance to finally become a human. She stumbles across a couple star crossed lovers in Princess Jing (Wei Zhao) and the head guardsman of a border city (Kun Chen). She sees her chance to manipulate the situation to her own benefit by igniting jealousy between the two...but will the love of these two change her own desires?

Despite my eagerness to bite into such a visual feast of a film, I erred on the edge of caution in truly buying into the film. It's romantic triangle seemed a bit too cliche and stretches for me to reach for the demon mythology seemed a bit ridiculous. Luckily, "Painted Skin: The Resurrection" ably works the viewer in. As long as you are willing to bide the idea of a demon walking the earth in search of a way to be human, the rest is smooth sailing. And I fully suggest in throwing all your chips in because if you do, the film runs with it.

Visually speaking, "The Resurrection" is a full out stunner. Sans a few awkward moments of CGI including a bear attack that looks humorously awkward despite its extensive attempts at being dramatic, the rest of the film is something to be taken in. After seeing some of the amazing special effects and visual flair for pushing some solid limits like fingers under the skin and demon-zing people, I wished I would have been able to capture this film theatrically. As is though, the film is a beautiful Blu Ray experience with its epic score and strong colorful visuals that any fantasy or cinema fan will want to see just to experience.

Director Wuershan doesn't let the film completely succumb to a 'style over substance' manner either. Occasionally the film brushes over things that could have used a bit more depth like the 'Sparrow Demon' with her motivations and relationship to the newly found demon hunter supporting character, but when the film focuses down on the love triangle between our three leads - the film really does work like a Shakespearean tale that owns its depth and moral struggles. The actors all ably handle the subtle acting (and the outrageous action) with a pretty impressive consistency so that when someone goes and does something like cut out their eyes - it doesn't come out as cheesy when it easily could have. In fact, it is the acting in "The Resurrection" that truly had me hooked and grounded despite some of the extensiveness of the script.

Outside of some of my nitpicky comments prior the only thing I could have asked for more of was action sequences. What was included was very stylistic wire work with plenty of slow motion for modern action fans (it would have made Zack Snyder proud), but the cool raid scene was a bit short and most of the rest of the fight sequences are more for visual grandeur than actual strong choreography.

For the most part I really could not care less for fantasy driven films of this ilk, but "Painted Skin: The Resurrection" had me sold from the start. It's a sleek film that barely feels like its two hour run time and the visual epic-ness that coincides with a well executed tale of tragedy in the hands of a capable director and a strong cast simply stuns. It's a film that rises above its shortcomings with the vigor and grace of its opening ice shattering sequence and it really never slows from there. A must have for fantasy fans or those looking for something a little different in their film watching queue.

Now that you've had a chance to gobble up this review...you want to buy "Painted Skin: The Resurrection" I'm sure. Well we have links below to preorder this bad boy for its November 13th release in the US (or purchase if after that date). Highly suggested that one looks at the Blu Ray as it stuns in high def.