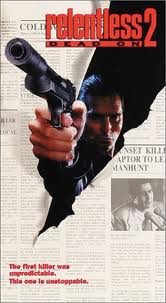 Aka "Relentless 2: Dead On"


With “Relentless” being a massive hit on the home video rental market, the serial killer highway was paved with “Dead On: Relentless II” being the first of many sequels to follow in its wake. Sadly going into this sequel it has two massive blows to its credibility. First is the departure of original director William Lustig and second is it being made direct-to-video, which almost guarantees it to be a bland, forgettable follow-up. These two black marks made me go into this sequel with low expectations and but to my surprise it was a hair better than I presumed.

Following the events of the original film, detective Dietz and his wife are having marital problems due to him being ‘married’ to his job. While trying to mend the bridge with his spouse, another serial killer (Miles O’Keefe) pops up on L.A. seemingly killing his victims at random. Dietz is forced to team up with a smarmy FBI agent and Dietz smells a cover-up a mile away and has to stop the killer, as well as blowing the cover-up wide open in the meantime.

The film suffers by not having the visual talents of William Lustig behind the camera but the look of the film is definitely not as flat as it could have been due to it being made, shutter, ‘direct-to-video’. For a DTV flick it’s got a lot of style… not as good as the original mind you but not bad at all and director Michael Schroeder does what he can to give the flick some polish.

The cast is also again strong with both Leo Rossi and Meg Foster reprising their roles and Rossi again owns the role he created. His Sam Dietz character is such a loveable prick that one can’t help but get engrossed with him. Dietz is good at his job and that’s rule number 1 for an audience to like a character, no matter what the job be. I can’t believe I’m saying this but Miles O’Keefe, known for playing braindead beefcakes in such turds as “Ator the Fighting Eagle” and “Tarzan the Ape Man”, is actually, dare I say, GOOD in the role of the killer. O’Keefe has a striking look that is perfect for a hardcore serial killer and the filmmakers know to keep his dialogue to an absolute minimum, a smart move so O’Keefe doesn’t embarrass himself.

"Dead On: Relentless II” isn’t a bad sequel but thanks to original director William Lustig hightailing it and the film being regulated to the “direct-to-video” market does hinder the final product ensuring that it will never eclipse the original. Still the director showing better style than the typical DTV film and another strong cast makes it a worthy follow-up to an otherwise watchable, yet also run-of-the-mill “to catch a killer” thriller.