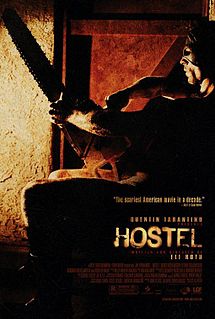 "Hostel" is one of those horror films that tends to divide fans. Even though I am quite the Eli Roth fan as I find him as one of the few directors that truly loves and understands the genre, I have my own mixed feelings about this film. Each time I watch it, I find something more to either love or hate and depending on my mood whether I am fighting for it or against it. It's one of those kinds of films. As it is though, "Hostel" does exactly what it intends to do, modernize an exploitation film without losing the elements that make the genre what it is. In this regard, "Hostel" is a massive success even if I have my issues with it's story and depth.

Paxton (Hernandez) and Josh (Richardson) are college buddies on their way across Europe looking for a good time and girls. They hook up with an Icelandic backpacker Oli (Guðjónsson) for the trip and end up being directed to a lavish hostel in Slovakia. Here they find heaven. They find two beautiful women who are massively interested in them and the parties and alcohol flow endlessly. That is until Oli mysteriously disappears. And the townsfolk seem to be hiding a secret. A secret that will these college buddies fighting for their lives against an institution built on human death...

The interesting thing about "Hostel" is how it divides horror fans. Love it or hate it, the damn film does its job and does it with vigor for the genre. The atmosphere, particularly in the latter half, is impressive, the twists that the film takes are daring, and the horror both conceptionally and visually is of high quality. If these are the things you are looking for in a film then "Hostel" has it down. The way that the film transfers from the colorful Amsterdam clubs/red light district to the rather dreary and grotesque abandoned factory of its finale is almost artistic and Roth's odd ability to shift our views from our douche-bag heroes into relatable victims is pretty impressive too. And the torture sequences actually utilize tension and atmosphere much more than people generally give them credit for and it really hits home in horrifying ways. In these ways, I love what "Hostel" has to offer and the more I watch it the more I love these elements.

But there is a odd down side to this modern exploitation film. "Hostel" has trouble balancing our investment into the situation with silly humor and exploitation portion of its idea. The first half of the film seemingly drags on and on (with relatively little come around payback at the end) and really pours on nudity to match the stupidity of the pprotagonists. We know these guys are stereotype college guys with silly toilet humor and its almost irritating how much Roth tries to make that clear. WE GET IT.

And then the film does a few odd things for the sake of exploitation. The excessive nudity can be a little much, but it even goes beyond that. Half the time I love that Roth is willing to go as far as he does with the extremism of the film, but the other half seemingly makes little sense. One character commits suicide with little motivation to do so (although the resulting gore shot is awesome) and the child gang has a humorous throw down with some thugs that drags on a little too long. Many of these moments just pull a little too hard for what they are and it undermines many of the good qualities that they do bring to the film.

So as I stated at the beginning of this review, I do really love/hate "Hostel" and each time I watch it I love the elements I liked a little more and hate the elements I found annoying more too. In the end though, Eli Roth proves he is one of the best modern horror directors (I'm still out to vote on him as a writer) and the man knows his horror. "Hostel" is brutal and atmospheric, but its also often missing some motivations to make it work as well as it needs. It's a must see for horror fans, but not necessarily deserving of some of the worship it receives.