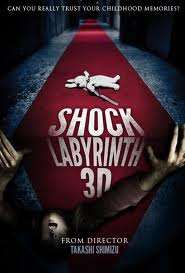 When a film is directed by Takashi Shimizu, the man who gave us one of the scariest ghost films ever made in "Ju-On", I simply cannot say no to it. No matter if his most current films have been relatively weak (cough "The Grudge 2" cough), he's due some redemption of sorts. That's why I was rather stoked to finally see "The Shock Labyrinth" in all of its wacky 3D J-Horror ghostly torture. The end results of this trippy journey into the hidden secrets of four Japanese youth is one of pretty mixed results, but I certainly dug the atmosphere and concept of the film.

It's reunion time! Three childhood friends are off to reconnect with one another after years of being apart. They are expecting good times to reminisce and find each other once again. What they don't expect is for a long missing friend to reappear at their doorstep. And once she falls ill while returning her home, they decide to take her to the nearest hospital...and the walls between dream, reality, and memory begin to blur as they collectively begin to remember why she went missing in the first place.

The plot of "The Shock Labyrinth" is one that might seem a bit familiar. We've seen a hundred J-Horror films of a similar tale and style done in a variety of ways. But this is Takashi Shimizu we are talking about here. The man practically made J-Horror a genre of its own and a world wide phenomenon. And he did with a relatively plotless film in "Ju-On." So "The Shock Labyrinth" should be right up the same ally, right?

Yes and no. Stylistically speaking, "The Shock Labyrinth" is a relatively by the numbers J-Horror film. Shimizu focuses on the atmosphere and kicks in enough creepy fucking visuals to make you think twice about chasing pale Japanese children down hallways (or in this case around spiral staircases). In many ways, I love the subtlety of this film. There is a lot of cool visual detail work (the feathery floating pieces and the oddly creepy rabbit back pack for starters) that helps the obvious budget constraints of the film. As always, the director delivers some pretty creepy moments and strong atmospheric drive in the film.

There are two things though that really prevent "The Shock Labyrinth" from even reaching the heights of peer films. Firstly, the acting is atrocious. Our lead in Ken is downright laughable at times and his supporting cast is rarely much better. For a film with only a handful of cast to begin with, this is shocking in itself. They really couldn't find anyone better? Secondly, the film is simply too confusing. "Ju-On" had this artistic vibe to its intertwining and jumping tales that wove its overall narrative. This film desperately tries for that same feeling and misses more than it hits. It can work. The flashbacks to their childhood in the haunted house and how it repeats in the present time to torture our characters is a fun idea and can be brutally revealing. It just doesn't work all the time. By the end of the film and its final twist, I wasn't sure what really had happened and the film doesn't pander to that question. In fact it likes to muddle it even more with hints that go in various directions. Although I appreciate the attempts at making a clever, those same jumps also make it frustratingly vague.

I am going to give the film the benefit of the doubt here though as I have a feeling that it will grow on me with time and repeated viewings. Don't blame me if my rating here at the end changes one way or another in the future (I'll note it at the end of the review if it does and why), but I enjoyed this film more than a lot of other people. It definitely is not perfect and certainly does not match Shimizu's earlier work. I still enjoyed its atmosphere and visual prowess at going about a rather mundane story. "The Shock Labyrinth" might not be for everyone, but it had its charm on me.

Feel like you need to experience "The Shock Labyrinth" for yourself and see what you think about this ghostly tale of discovery? Click the links below to order your copy now and support Blood Brothers and the awesome people at Well Go USA!