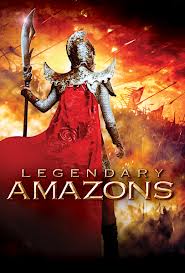 The Shaw Brothers are one of the film companies that changed the way film was done. Their influence in Asian and world cinema can still be felt to this day and their dedication to genre films has created a voracious and almost cult like fan base. Of which I would include myself. Yet it shocks me that in this day and age, there isn't more of their films being remade. One here or there (and a "Deadly Venoms" remake that has been indicated for years and years), but never a full blown assault of Shaw remakes. That's what makes "Legendary Amazons" one of the first of its kind. A massively released Shaw Brothers remake and one that the awesome Well Go USA deemed worthy for a US release. Could it possibly live up to its own hype? To the legendary status of its originator "14 Amazons"?

The Song Dynasty has come into a bloody war with the brutal warriors of Western Xia. The Emperor is fighting with little help and after significant losses to the his enemies, he sends one of his best generals Yang Zongbao (Richie Jen) to fix the situation. When Zongbao vanishes at the front lines, his work is then bestowed on his only son Yang Wenguang (Xiao Ming Yu) - the last man of the Yang clan - to finish the job with a small army. The entire Yang Clan, now mostly made up of skilled women fighters including Zongbao's fierce wife (Cecilia Cheung), will vow to protect their last male family member as his personal protectors and defeat a massively superior army. No matter the cost.

To put it simply, this is a great concept for a martial arts film. Revenge, family, loyalty, epic battles. The Shaw Brothers had it right the first time around to make this into a movie. It's epic and has plenty of opportunity to kick a lot of ass. At times, "Legendary Amazons" does just this. It builds on this epic story and despite having to rush through some of its plot points to fit it all in, it really carries the heart and soul that made the original one such a classic. In this sense, "Legendary Amazons" is a worthy remake and a visual spectacle worthy of its mass release.

If there was one word to aptly describe the film as a whole though, it would be 'inconsistent.' That doesn't necessarily mean the film is bad, as the term would indicate there are many high/solid moments to love. There are some moments of endearing heart to its character interactions with some strong acting moments to move them and the visual design of the film is gloriously over the top and fun. The fights are ridiculous with plenty of oddities to go around and I was never bored with the film. It does entertain and as a film to waste a slow afternoon on - I was happy with its entertaining qualities.

Inconsistent does indicate that there are lows to the film too. The original film might have been cheesy, but it definitely carried a lot of charm with it. This one simply translates to cheesy without the charm in its modern adaption. And even many of the strengths mentioned above are not consistent throughout the film. The fighting, although over the top with wire work and well paced, is sometimes done in fast forward with some of the stunts looking very staged. The acting? Although strong at times, is spent delivering some really awkward dialogue and and supporting cast (including Xiao Ming Yu as one of the male leads) is mediocre at best. Even the costuming with its vibrant colors is either jaw dropping in design or horribly crafted as shields and weapons wobble with hits and our invaders look like they skinned a flock of Ewoks to make their clothes.

Honestly, I'm not sure what Frankie Chan was thinking half of the time. His vision of the film should have been along the lines of a mixture of Zhang Yimou ("House Of Flying Daggers") with the fight work of Tsui Hark ("Detective Dee"), but ends up missing on both with inconsistent execution values.  The film is beautiful on its Blu Ray high definition display with its grand sound and vibrant colors, but the actual quality of the film itself is pretty mixed. It was fun and it entertained, but when the two above film makers are doing essentially the same and to much higher quality - its hard not to be disappointed with the results.

BONUS PRAISE: I also highly suggest watching the behind the scenes featurette on the US release. It has some interesting "fight sequence" how was it done moments and a handful of hilarious bloopers.

Feel like you need to experience the entertain ride of "Legendary Amazons"? Then you can purchase the film at the links below (at the time of this review its a pre-order due out October 16th) and support the scene!