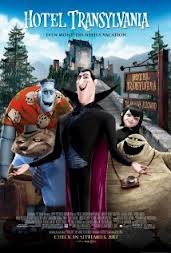 Howloooo!!!! Ghouls and Goblins. There is a chill in the air as I write this review, which can only mean that All Hallows Eve is just around the corner. Like most review writers I follow, this month of reviews will have a horror theme to them. While my first review of the month may not qualify as true anime it is animated so I get a pass here. I took it upon myself to trek out and see this movie solely based on the title. I honestly had no idea it was an Adam Sandler and friends movie. Based on the movie poster I thought this looked promising, so grab your weapon of choice as we battle the monsters together.

This tale centers around the all famous Dracula (voiced by Adam Sandler) and his daughter Mavis (voiced by Selena Gomez). Now this is not the Dracula that we grew up with, no no this version is more the businessman type.

Dracula owns "Hotel Transylvania" which is essentially a safe haven for all things that go bump in the night. All the big names are in this film from Frankenstein's little creation (voiced by Kevin James) to the invisible man (voiced by David Spade) and they have all gathered at Drac's 5 stake hotel to celebrate the above mentioned daughter's 118 birthday(equivalent to humans turning 18). So this version of Dracula is a single dad and has been for many years. Which makes for a touching story to go along with the main storyline of this film which is a coming of age father/daughter story.

Dracula has spent all of Mavis' life sheltering her from the human world. That is the reason why after all that he created the giant hotel du monster so that all monsters can be themselves without fear of the outside world. So imagine the shock when his grand hotel is suddenly breached by an unsuspecting human child who just so happens to be about the same age as his birthday girl. That is when the fun begins. Poor Drac trying to hide this human from all his friends and daughter which he has lead to believe that humans are the most evil thing in the world. 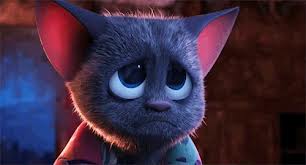 Add in several supporting cast members such as Steve Buscemi as Wayne the Wolfman and SNL star Andy Samberg voicing the human boy-child Jonathan and you got yourself a pretty funny cast. Now with this sort of all-star cast one could expect lots of adult themed humor. This however was not the case. I found the lack of adult humor rather refreshing to be honest. This film had a Saturday morning cartoon feel to it which I appreciated and enjoyed. The animation was well directed and appealing. It was bright and crisp with colors that were spot on for the tone of the film. The facial expressions were again well directed and believable. 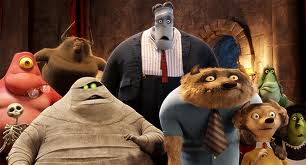 So overall I did enjoy the film, it had its ups and downs but it knew what it was. This one was certainly for the kiddos. I felt like the movie really slowed down once the story turned serious. With that in mind as a parent I am glad we didn't take our toddler along and would recommend this film for an 8 + age group. So if you are looking for a fright filled evening this is not your answer. However if you want to go out and have some innocent fun with family with no fear of what your child might pick up on then by all means check this movie out. Until next time keep watching anime!