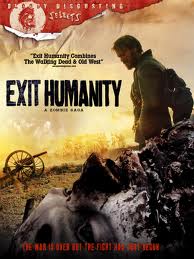 "Exit Humanity" had been sitting in my watch queue since the damn thing came out on home video and what better time to take a crack at this historical zombie film than during my horror-thon in October. Although this little independent film with its rather impressive set of supporting cast definitely ranked high on some levels of the concept, the overall execution was a mixed pot of zombie stew. I loved the idea of a civil war era set zombie spectacular, but "Exit Humanity" rarely invoked the kind of emotional and unique relevance that its concept could have carried.

Edward Young (Gibson) was there to witness the beginning of the end when he was fighting in the Civil War. Now it's six years later and the spread of the zombie plague has taken both is wife and son. In desperation to fulfill his duties as a father and husband, he takes to the road determined to have his son's ashes placed at a promised site. But the world is different now and friends and foes are hard to distinguish as he comes across a man desperate to find his sister and a rogue group of militants that are bound determined to find a cure.

Once again I stumble across an low budget horror film (almost plays out more like a drama here) that I desperately want to love. The concept of a zombie apocalypse set to the aftermath of the Civil War is damn near brilliant and there are plenty of moments where John Geddes does take the film to that level with artistic shots and some strong narration. Unfortunately there are two things that prevent "Exit Humanity" from reaching that level, the budget and inconsistency of execution.

Budget wise, the film just doesn't quite have enough to really run with its concept. Although Geddes does keep the sets and costuming to a minimum for this sake - the film loses a bit of realism without those historical elements to remind us of the time frame. Our hero's jacket looks far too modern and the scope of the landscape is simply hindered by the lacking budget. The special effects for the zombies and the general look of the film is quite strong in this regard and its obvious that was one of the focuses of where the money should go, but it lacks the scope that would have really made it something to see.

And going along with that, "Exit Humanity" has really high points and really low points that are heavily influenced by its budget and other artistic factors. Brian Cox gives a riveting narrative to the film with strong moments that pop (perhaps coming out as the best thing about "Exit Humanity") and make our lead actor Gibson a bit more of a miss than a hit in the role. In fact, most of the cast is extremely inconsistent with their scenes where they are either nailing this moment of silence or totally botching an emotional break out. As much as I love seeing the great supporting cast they have here (Moseley, Wallace, McHattie) most of them seem on autopilot through the film and underdeveloped as characters. Geddes tries to grasp some things from the cast and from the script, but too often it fumbles right before the big score.

There are also a few other oddities about "Exit Humanity" that left me unattached. Although the "chapters" of the film give the film its distinctive "diary" re-enactment structure, they are mostly irrelevant and the film will occasionally break into an animated sequence done in the style of his journal drawings that really pull the viewer from the experience reminding them that it is, in fact, still a movie. It's these elements that really make "Exit Humanity" an overall miss opportunity of execution.

For a low budget and independent film, "Exit Humanity" certainly shows promise for Geddes with it's ambitious concept and choice artistic moments. The film just can't carry that same energy throughout and leaves the end result mixed. I want to love this movie just for the idea...but "Exit Humanity" makes it damn hard to even do that.

Intrigued by a post-Civil War zombie epic? Feel free to use the link below to pick up your own copy of "Exit Humanity".