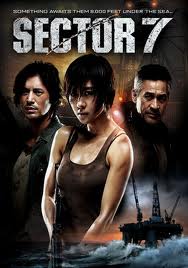 To say that South Korea has established themselves as one of the best cinema markets in the world might be the understatement of the year. Although many of their films fail to find mainstream US success, their critical acclaim overrides much of that. I, for one, will put all of my money on their continued success as genre film makers. Which is perhaps why the relative mediocrity of "Sector 7" came as a shock. Giant monster film set on an oil rig? I saw "The Host". I know that this film has potential to be relatively...scratch that...absolutely fucking awesome. Yet, "Sector 7" stumbles too often and relies too heavily on its visual effects to properly come off as it could have. The film is fun and has some great character work in it, but the plot plays off painfully predictable and the focus on CGI tends to make some laughable moments. Not quite what I was expecting at all.

Sector 7 has always been a lost cause when it came down to actually striking oil. The offshore rig is minimally ran, but Hae-jun (Ji-won Ha) is determined to find the oil that her father died looking for. She has to battle it out with the captain more often than not and her crew is talented, but rather odd. When the crew actually does find success and oil, they dredge up something else. Something hidden and dangerous...something that holds a secret that will either make them all rich or kill them in the process.

There is plenty to enjoy about "Sector 7" in all of its oddities. Believe it or not, I think many of its scripting foundations are quite solid and for a movie like this - this is where the problems normally occur. Not with "Sector 7" though. We have likable and intriguing characters that all have some impressive acting to go along with them and the film has a nice build in the first half. It does has a relatively underdeveloped romantic subplot, but in a film like this I wasn't expecting too much of one to be fleshed out. The situation and their drive to be successful at finding oil in a forsaken sector is paced well and even when they begin to introduce the "monsters" of the film, it really is somewhat of a fascinating venture into how it will all play out. I think the script, at least for the first half, seems pretty well developed and put together.

It's the latter half and some of its executions that drown this creature feature. The film focuses far too much on its CGI and it's only mediocre CGI at that. They green screen a ton of the oil rig back grounds (giving it a false, almost comic book-like look) and the monster's design is a bit baffling. It's definitely not the sleek and killer design with execution "The Host" had and my expectations were undercut there. Then to top it off, the film decides to give the monster portion of the film a "secret developmental program" reasoning for the 'why' to the 'what'. While it's rarely hinted at before hand, it seems like that motivation was definitely tacked on as an afterthought and far from developed to make the shock moment worth it.

"Sector 7" was almost like watching two different movies. The first half is a dramatic well developed premise with strong characters and some well placed kooky humor. The second half is an action fueled "Sin City" inspired CGI fest that lacks cohesive narrative and atmosphere that it desperately needed to work. Although the film is fun and the characters were enough for me to stay interested, my disappointment in the overall execution became overwhelming by the time the credits rolled. Perhaps "The Host" just had me spoiled in great monster movies...