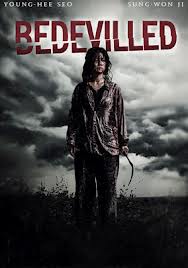 After an excruciating two years of waiting for "Bedevilled" to finally come to the US, our friends at the ever vigilant Well Go USA having finally brought us the critically acclaimed film. And on Blu Ray nonetheless! So now the Blood Brothers finally have their chance to partake in this award winning horror/thriller... and it's quite the emotional rollercoaster ride.  In fact, I would go as far to say that I have not had a film bring out as much emotion in me in years. I literally had to stop it twice during its play time just to walk away and release the tension and anger that it had built up in me. If a movie can do that with "Bedevilled"'s relatively simple premise - then you know it has you by ears and its dragging you along with it for good or bad.

Hae-won (Sung-Won Ji) has been having a rough time living in Seoul. Her job has been increasingly stressful and her fear of retaliation from those threatening leaves her on edge when she is asked to testify against two gang members who brutally beat a woman in the street. She decides that a vacation is a great idea and heads to an island where she grew up with her awkward friend Bok-nam (Young-hee Seo) at her friend's incessant pleading. What she finds on the island is that Bok-nam's life with her young daughter has degraded into something of a societal nightmare at the hands of her monstrous husband (Jeong-hak Park) and the locals. And when a tragedy strikes, the thin strand of sanity for Bok-nam may not be enough to hold her back.

For a movie that was made for a little over $600,000 (deeming it very low budget), never does it feel that way. It's expertly crafted in story, stunningly built visually with great atmosphere, and the acting is blow-you-away brilliant. For a low budget "horror", it feels almost real. And the story is so simply and realistically built that I half expected the film to be based on some horrific true event of some sort. This realism is the reason that it dredged up so much emotional anger in me. When I saw what was happening to this poor woman and her daughter on this island (and how damn good the actors and director pulled off making it feel real) it just enraged me. By a half hour into the film I was yelling at my TV for Bok-nam to go crazy and kill all those bastards. You know a movie is doing great when it generates that kind of reaction.

Sans a few illogical moments when the film takes a turn for the truly horror inspired finale (which were justified because I could not care less about the logic as long as she started taking out some fucked up islanders), this film is a subtle and very enthusiastic character study with plenty of social commentary to fuel its rising tension. Both of our leading ladies stun in their respective roles each with a specific issue to overcome in their own flawed manners and first time director Cheol-soo Jang ably uses his limited sets for maximum effect. What starts off as a serene beautiful island slowly turns into a dark cage before becoming the death trap of its last act. It's this smooth and almost elegant story telling narrative and great character work that make "Bedevilled" not only one of the best horror films of the year, but one of the best films from Korea.

"Bedevilled" is a film that comes with such high recommendation for those with the stomach to watch horrific and realistic events unfold that it must be seen to be believed. Everything about it is of the highest quality the story, the directing, and the ridiculously amazing acting. It's a stunner cinematic achievement that cannot be shaken from your psyche after the fact, perfectly doing what a good horror should do: leave you breathless both conceptionally and in its brilliant execution.

The fact remains: you NEED to see "Bedevilled." So you might as well not waste any more time and click the following links and purchase your copy. Both Blood Brothers and Well Go USA would be much appreciative.