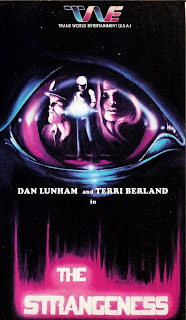 Though I gravitate towards the low budget, independent side of cinema, there comes a point when a film can actually become too low budget for me to truly enjoy. As a general rule when a film starts to dip below the $100,000 mark, the enjoyability factor really starts to bottom out for my taste and "The Strangeness", with its meager $25,000 budget, sadly falls in this category. Still "The Strangeness" still isn't without some well earned respect for what the filmmakers were able to accomplish with in reality no money to work with. 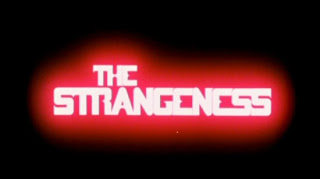 The plot is simple monster movie material with a group of geologists and miners exploring an abandoned mine with a dark history to see if it's worth re-opening. The story is that the mine was closed due to miners getting killed by a monster, and guess what, the monster really exists and now our explorers have to find their way out before the stop-motion beast or the mountain itself makes them permanent residents.
Due to the film having no real budget to speak of it means that the cast had to work for little or no payment... and it shows. Some of the performances are stomachable but most is deplorable, with the worst being the stereo typical asshole boss of the expedition who is willing to sacrifice his whole crew in order to get the mine re-opened. This low budget also rears its ugly head in the production design as many of the interior locations looking like nothing more than plaster of paris tunnels made in a darkly lit garage, though to its benefit the graininess of the 16mm helps hide much of this (god forbid "The Strangeness" ever gets a blu-ray release!).
The low budget hits the hilarity point when our monster is finally revealed and all looks good intitially as it is done in glorious stop motion. Amateurish stop motion but bad ass stop motion none-the-less. It's not the stop motion work that got me (I am a fan of the this dead art) but the actual design of the monster, which literally looks like a vagina with tentacles. Seriously who thought it was a good idea to design our monster's head after a woman's most holy of places?
Even with all these flaws I mentioned it's still amazing that the filmmakers were able to make a movie that somewhat worked and had any flow to its structure with such a low budget. The John Carpenter-esque synthesizer score, eye catching title sequence (done by the guy who did "The Terminator" and "Night of the Creeps") and atmosphere help but overall "The Strangeness" is just too damn low budget to make it truly entertaining thanks to none-existent production design, dull pace and all the non-acting. Distributors must have felt the same way as the film was completed in 1980, but only ended up appearing on VHS in 1985 without the luxury of having a theatrical release.

Written By Eric Reifschneider
Posted by Cronosmantas at 6:15 PM