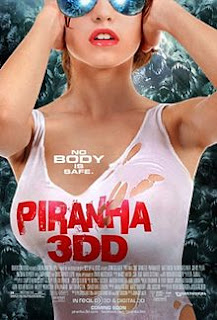 For those of you new to the site or for those unaware, my review of "Piranha 3D" wasn't exactly all favorable. The film was full of cheesy and gory goodness, but the blend of seriousness, horror, and humor didn't quite catch my fancy like it did for some. Thusly when I criticize "Piranha 3DD" for being a larger offender in the same category know that it means a lot. And the film doesn't even have the great gore or charm to smooth it out either. So if the film is meant to be gory, funny, and ridiculous and it fails at all three...take a wild guess at what the reaction is going to be.

It's been a year since the prehistoric piranha busted up the party at Lake Victoria and memories quickly fade. When a new adult themed water park sets their sights to open though and begins pumping water from a mysterious underground lake filled with piranha spawn, the trouble begins to brew. It's up to the owner's marine biologist daughter Maddy (Panabaker) and her admirer (Bush) to get together enough evidence to get them to shut down the park before it becomes another blood bath.

To be perfectly honest, my hopes were actually quite high for this one. It's got great cameos and director John Gulager's "Feast" franchise is a surprisingly fun and offensive series. All one needs is lots of fun gore/deaths and a ridiculousness to its plot and this film should be awesome. Ironically, besides a couple scenes, this film has none of that. It's ridiculous in really odd ways, it's rarely funny, and the gore seems rather subdued for a film of this variety. Literally, "Piranha 3DD" has nothing going for it overall.

Granted, the film does have its moments. Gary Busey and the flaming cow for the introduction sets some high standards of low brow comedy and Ving Rhames' charisma smothers the screen with humor and shotgun legs. In fact, the cameos seems to be the only thing that work. Beyond that though, the film struggles. Our teen leads for the film are horribly written, far too serious, and grating when it comes to more strenuous acting, there is absolutely nothing about the film that is horrifying unlike the original one where Aja was able to inject some sort of tension into the film, and despite some extreme attempts at death sequences (again a flaming cow and a rather awkward sex scene gone wrong mid way through the film) the lacking gore/special effects and the lacking extremism of the finale leave campy horror fan in me scratching my head in bewilderment.  Truthfully, I found nothing to really count for the positive sides for this movie.

Unless you are a fan of massive amounts of women going topless as a setting for a horror movie, "Piranha 3DD" damn near falls flat on its face for every other element. It has its moments of fun (Christopher Lloyd is always a hoot to watch for his weird characters) and a pretty silly ending that had me smirking, but getting to those moments was frustrating and confusing. For a film where all you need is to 'gratuitous' everything, this film fails to deliver. It slowly circles the drain of its own plot hole riddled script, drowning all the great things that made "Piranha 3D" work to begin with. How could a film go so wrong with so little it needed to accomplish?