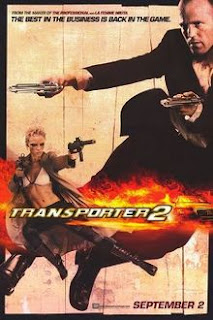 After Jason Statham kicked some heads in with the surprisingly effective "The Transporter", it wasn't hard to see that there was something here. Something to the character and the actor that played him. Thusly, it wasn't long to franchise it out with a sequel under the basic moniker "Transporter 2". What worked in the first one (charm and action mostly) is out done with this second entry as the glory team that is producer/writer Luc Besson, director Leterrier, actor Jason Statham, and fight choreographer Corey Yuen bring bigger set pieces and even more outrageous stunts into the film. This is at the sacrifice of adding a whole lot of character development and logic in the plot, but then again...it's Frank Martin kicking more ass.

Frank Martin (Statham) has had to change a few things. He now lives in Miami and as a favor to a friend he has been the driver for a very rich family for about a week. His relationship with the son has bloomed quickly and Frank finds himself becoming somewhat attached. When a terrorist group decide to target the family by kidnapping the son, Frank takes it personally and takes charge of the situation to get him back. What he discovers might be much bigger than just a kidnapping...

I could rant and rave about the abysmal logic of this film and how its plot of virus warfare and kidnapping for terrorist financing makes no sense, but at the end of the road and when all is said and done: this movie is fucking entertaining as hell. As a film critic, its easy to point out its poor aspects like the lacking character development even for our hero or any of the secondary cast. The poor CGI used in many of the action sequences. The logic that's seemingly forgotten to give us what's needed for plot progression like flipping a car to lose a car bomb attached to the under carriage. This is all true and very much prevents this from becoming a great movie. Luckily, it's quite easy to overlook its many, many faults.

Just like with the first film, "Transporter 2" is carried by it's charismatic and ass kicking hero and the amazing action set pieces it utilizes. This role was born for Statham and he was born to be Frank Martin. It's hard not to cheer him on as he goes to the ends of the earth to push forward and save the day despite being somewhat of an anti-hero. He basically runs around and beats the shit out of everyone until something goes right. Might not work in the real world that way, but its entertaining to watch Statham do it and do it with very little to say about it outside of his rules.

Statham's work and the ridiculousness of its plot are only heightened by Corey Yuen's ability to craft some of the most ridiculously cool action set pieces known to man. Outside of a few high octane car chases, its the choreographed fight sequences that steal this movie. A boxing match inside of a boat on risers, a fire hose stunt extravaganza, and a finale on board of a falling plane make this film eclipse the first one in every way imaginable. Although most of it seems beyond ridiculous (the henchwoman is always in her underwear, Frank Martin can jump over two crashing cars below him, and the previously mentioned car flip bomb removal come to mind), it's hard to deny that "Transporter 2" doesn't pack it all in here to keep the adrenaline up and the action flowing.

"Transporter 2" is far from a great film. It's silly, plot hole riddled, and has little to no depth. It's also one of the most exciting and best choreographed modern action films to come out of the Western side of the planet...which in my book makes up for a lot. Statham kicks it once again with charm and ferocity and any one who's willing to set aside their logic for an hour and a half is simply going to have a riot with this movie.

Written By Matt Reifschneider
Posted by DarkReif at 11:51 PM