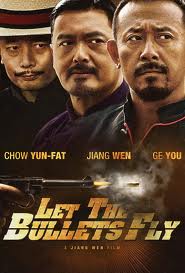 There has always been pride in watching odd films here at Blood Brothers, but there is something so distinctly unique and flabbergasting about "Let The Bullets Fly". A style and wit so subtle and bombarding at the same time that I was inclined to watch it twice...in a row. One thing is for certain and that is "Let The Bullets Fly" will not be for everyone. I stress this wholeheartedly, because this is a very strange film. I also stress that one should see it to believe it and not hold any disregards about the film. Let it embrace you with its quirky plot, lightning fast dialogue, and let the bullets fly a while.

The time is 1919. The place is South China. The country is in a state of growing pains as it transitions into a new age and the intelligent bandit leader Pocky Zhang (Jiang Wen) is looking to take advantage of that. When he derails the train of an upcoming governor Ma Bangde (Ge You), he takes him as a counselor in a plan to make himself the governor of Goose Town. When he gets to the small town though, he discovers that his intentions and style of making money go head to head with local mobster Master Huang (Chow Yun-Fat). Now they must play a game of violent chess against one another to see who will remain the king of Goose Town.

Initially I went into "Let The Bullets Fly" thinking it was going to be an action packed period piece of mobsters and lawmen. I was wrong. Oh, was I ever wrong. This film is not that simple. The action is there with plenty of gun toting and occasional mayhem of vehicular combat (including a train that flips ass over teapot into a lake), but the true highlight of the film is its increasingly ridiculous and off kilter script. When the action does commence, its a nice break from its dialogue heavy character drive, but it's rarely the focus here.

The script and all of its larger than life characters is what makes "Let The Bullets Fly" the brilliant film it is. Director/writer/lead actor Jiang Wen portrays a deeply torn and insightful bandit leader and governor hopeful with subtle vigor and fast intentions. He handedly could carry this movie on his own and (we could only hope) delivers a fantastic character that could be franchised on. This is matched by a slew of amazingly fun and heartfelt secondary characters including the smarmy and lying counselor 'Old Soup' and the villainous crime lord Huang played with intensity only known to Chow Yun-Fat who sheds his normally introspective self for the role. The rapid fire dialogue and clever word play (even with translation) heightens the ridiculous plot and the film begins a series of events that will leave the audience as confused and intrigued as the characters involved when the bandit and the mobster begin their outrageous game of chess in Goose Town.

With its subtle satire on politics, business, and the moral gray of good vs. evil, "Let The Bullets Fly" takes it all with an eye for the slapstick and impressive writing that leaves the viewer craving more. This was one of the rare films that takes its concept to all levels of extremism without ever losing sight of the final product and its fully worth the watch.

Written By Matt Reifschneider
Posted by DarkReif at 4:48 PM