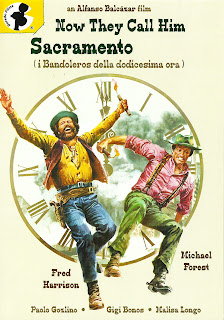 NOW THEY CALL HIM SACRAMENTO


Mimicking how "A Fistful of Dollars" revolutionized the style of the Spaghetti Western, a little film in 1970 called "They Call Me Trinity" rejuvenated the floundering genre by introducing the first buddy comedy formula into the mix.  The two "Trinity" films were huge successes as audiences lapped up the new comedic approach to the genre of this of course opened the floodgate of imitators, with the similarly titled "Now They Call Him Sacramento" being one of the many but thankfully not one of the worst. 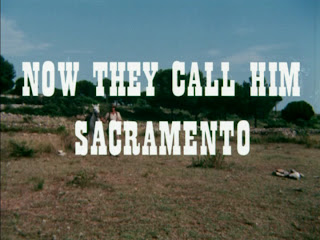 Sacramento, with the aid of a big burly guy disguised as a priest and a small Mexican called Tequila, foil a train robbery and in turn decide to keep the bandits' money for themselves. While deciding what to do and how to split the dough, they take some downtime in a small town that just happens to be the headquarters of the bank manager that set the whole train operation up. Can Sacramento and his duo of friends defeat the banker and his gang while at the same time defending a beautiful woman's land from foreclosure before becoming members of the local graveyard?
There's no hiding the fact that "Now They Call Him Sacramento" is a direct result of the popularity of the "Trinity" films as it is a direct carbon copy, from the plot to the comedic approach. Hell you could change the name from Sacramento to Trinity and you could have yourself a bona fide unofficial sequel. Hell even the comedic duo of Michael Forest and Fernando Bilbao is a direct knock off of the Terence Hill and Bud Spencer buddy system, right down to the big burly guy using Spencer's trademark head bopping to knock out thugs.
What makes "Sacramento" not as funny or entertaining as the Trinity films is the lack of chemistry between our two leads and it's obvious these two would never go on to have the blooming career of our beloved Hill/Spencer team-up. Our fifth wheel team-member Tequila (the Joe Pesci of "Lethal Weapon" if you will) also tends to grade the nerves and the love interest for our title character is a complete waste and adds nothing to the film other than a pretty face. Still all is not lost as there are still plenty moments in the film to get a snicker out of the audience, especially the third act in which our duo literally destroy an entire town.
I went into "Now They Call Him Sacramento" expecting a "Trinity" rip-off and that's exactly what I was dished up and that expectation is probably what helped me enjoy the picture. If you are a Spaghetti Western fan that enjoys the comedic tones of the "Trinity" films then I see no reason why you shouldn't find some enjoyment out of this obvious knock-off. The film is on DVD in a few different releases but the best is the release by Dorado films. The transfer is Full Frame but I never once felt I was missing anything on the sides of the picture so perhaps it was actually shot in this 1.33:1 ratio.

Posted by Cronosmantas at 7:31 PM