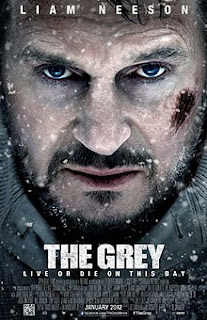 There are certain actors that I simply follow because they are awesome. Liam Neeson certainly falls into this category. He can be an amazing actor. He can be awful too although I still don't think "Star Wars Episode I" was his fault, but he is always kicking ass and taking names. That's why watching a pack of wolves and the Alaskan winter try to survive Neeson had to be seen. My hopes were not up considering it was a man vs. nature film and those tend to all follow the same formula, but the stellar direction and the charming manliness of Neeson kick this film up to the next level and make "The Grey" a must see for any cult film fan.

Ottway (Neeson) has had a tough time lately. He pines for his lost wife and finds no comfort in killing the wolves that attack the drilling team up in the harsh climate of Alaska. What he doesn't realize is that his plane ride home, along with all of the other men, is going to be cut short...by the ground. Now a handful of survivors must take the advice of Ottway to try and survive the wilderness. It's not only the cold and lack of resources that are coming for their lives...but a pack of hungry wolves seem intent on their demise too.

It is really hard not to enjoy this movie on some level. It's pretty simple as it doesn't pull a lot of plot twists to trick its audience. The way that director Carnahan takes it at a straight forward pace with only splashes of artistic merit allows it to do its thing and not worry about being something that its not. This is a very respectable way at going about the film. It's man vs. nature and despite some odd almost horror like methods concerning the wolves, it very much embraces that fact. Only to the film's benefit.

"The Grey" really embraces its details in ways that don't feel like its bombarding you with irrelevant information. Just the way that the setting is built with the snow, wind, and desolation instantly throws one into a panic mindset along with the characters. This great build of atmosphere (with a clever score that really uses space to its benefit) is pushed to extremes with believable characters that feel, for better and worse, like real people tossed into this horrible situation. Neeson certainly carries the flick - if I was in a bad situation, I would follow him to hell and back without a single second thought - with his great depth to a simple character, but he is massively supported by a great secondary cast too. Love em or hate em, these guys make you feel like you're there with them. It works so well in this way.

Occasionally, the film wants to meander a bit. The wolves make a great antagonist for the film, but it feels like they are filled with more malice than what would be realistic. Not that wolves wouldn't want to eat you in that situation (I hope to never find out), but its as if the conflict is sometimes forced and it feels a bit out of place for a film that stresses a very real environment and characters. It makes for an exciting film, I have to admit. It cooks the pace up to boiling at times and despite my skepticism of the idea, it works.

Don't go into "The Grey" expecting some clever artistic look at the man vs. nature genre (it has its merits particularly with how his memories of his wife and dad play out as a thread right to its controversial ending), because the film plays out much more simply than that. It's graciously effective at building pace and atmosphere even if its somewhat forced and fans of Neeson are going to eat up that character with mouthfuls of smiles. Not for everyone, but it was much better than I would have ever expected.

Written By Matt Reifschneider
Posted by DarkReif at 10:41 PM