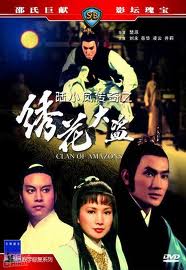 After seeing the fun if not cheesy "The Duel Of The Century", it was only the fan in me that had to go and search down its predecessor "Clan Of Amazons". It took some time, but finally the elusive film found its way into my watching queue. Although it has many elements that were repeated to stronger effect in its eventual sequel, "Clan Of Amazons" remained a rather fun detective film focusing on the mystery of finding the evil Embroidery Bandit and how it reflects through various elements of society. Unfortunately, the film also lacked many aspects that make a great kung fu film and thusly undermined the entire experience.

Lu Xaiofeng (Tony Liu) is known as one of the martial arts' best investigators. He thinks outside of the box and has the right connections to get to the right people. This is why a renowned officer seeks his help on a new case. A mysterious Embroidery Bandit has been stealing mass amounts of wealth and leaving a trail of blinded individuals in their wake. The clues are sparse and the danger is high. Particularly when his investigation links the thefts to a secret society of highly trained and vicious women...

Really the one thing that sells "Clan Of Amazons" is Tony Liu as the charismatic if not completely impeccable Lu Xaiofeng. Liu owns the role of Lu Xaiofeng with high end class and a screen presence that keeps the viewer glued to the screen. Although he is far from as arrogant as the character would become later on, watching him work his magic of logic and pull various side kicks to odd places to meet odd connections is quite entertaining. It's like watching a version of Sherlock Holmes in a different time period with different circumstances and this alone sells the film.

Beyond that though, I found the film to be rather...boring. Yes Tony Liu is entertaining to watch, but the rather formulaic Chinese mystery plot progression can be drawn out and predictable. They go to this guy. He dies. They find a clue and go to this lady. She dies (or disappears) as the mystery deepens. Wait! There's a clue and it points here to this guy. Let's go there! Oh man, he might be the bandit though. He is telling us to go here. Let's go! It get's to be a little overwhelming as it throws in a slew of characters who really only appear once or twice as the movie moves on. Half the time if a character popped back up, I wasn't sure quite who it was or how they fit into the puzzle. Multiple viewings would help strengthen this, but who has time for that when there are so many other Shaw films to watch?

To add to the mixed feelings I had about "Clan Of Amazons", I was massively disappointed with the lacking fight sequences. The film does decent enough with the brief spats that fit into the plot, but they are brief and often seem to be irrelevant. It isn't until the finale, with a massive sword fight that goes from a trap house to a swashbuckling boat sequence, that the film really embraces its martial arts choreography. By then though its almost too late to really get the film moving with the action set pieces.

There is much love for "Clan Of Amazons" out in the Kung Fu fan's world and to a point I understand why. Lu Xaiofeng is a fantastic character and the mystery of the film is fun. After that though the film tends to really flounder with its overly complex execution of characters and lacking kung fu set pieces. Perhaps if I had seen the films in their true order, I would have enjoyed this one much more. Be as it may though, the sequel "Duel Of The Century" is just improved all around.

Written By Matt Reifschneider
Posted by DarkReif at 10:50 AM