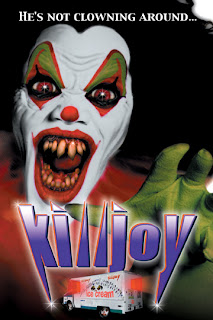 I feel completely violated at the moment. Why you ask? Because a no-talent ass clown named Killjoy just had his way with me ensuring I'm going to have to be sitting on a doughnut pillow for the rest of the week in order to heal. I just don't understand why all these clownsploitation horror films of last decade are so damn bad. Clowns are scary right? Well 9.9 times out of ten it doesn't translate into a scary movie with "Killjoy" being a complete incompetent 'joy killer' instead. 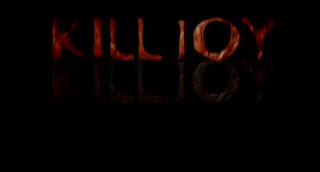 Taking place in inner black gang territory in an unnamed city, "Killjoy" opens with a 'nerdy' high school student getting the shit kicked out of him for hitting on a gang leaders bitch. This of course gets his ass killed but not before he brings his demonic clown toy "Killjoy" to life  to get revenge on all the thugs. The problem is Killjoy doesn't stop with his killers, but continues to murder anyone else involved in the nerds life.
The clown character of "Killjoy" is nothing but a lame, carbon copy of Freddy Krueger with a dose of Pennywise from Stephen King's "It" as he tries to be scary but all his mega lame comedic one liners causes the doofus to fall flat on his big ass red nose (the worst being the line "That's how you bust caps motherfucker" as he spits out bullets to kill a thug).  The character of Killjoy will NEVER go down in the annals of history among the likes of Freddy and Jason and for that I thank the horror gods every day.
The look of the film is nothing more than a small step up from a homemade movie. Not "Secrets of the Clown" bad, but close and if you have had the displeasure of seeing that hunk of shit then that is a scary comparison indeed.  Everything about this film is bottom of the barrel (of monkeys?) as the non-existent production values, sophomoric acting, mundane script writing, laughable computer effects and incompetent directing ensures the film will be a total bore to the senses. And seriously how did B-movie icon Charles Band get suckered into executive producing such a shit-fest?
"Killjoy" is nothing more than a less-than-routine would-be slasher in which someone thought up by quickly writing up an outline on a cocktail napkin while getting drunk with some buddies at a strip club. I'd say it's by-the-numbers but even that's too much 'praise' for such a hunk of worthless crap. Absolutely no thought went into writing such a banal 'horror' film and the killer clown shtick has been done death, and much better. It's hard to imagine that such a lifeless horror film would end up mutating into a franchise, with two sequels and a third in the works. Seriously, what the fuck?!

Written By Eric Reifschneider
Posted by Cronosmantas at 9:00 PM