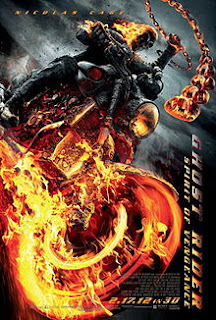 I would hardly consider myself a Ghost Rider expert being as I have never really read any of the comics, but I did see the first film and I know that it was quite the atrocious little piece of celluloid. When they announced that the crazy Neveldine and Taylor would be making the second film in the franchise though, it was hard not to feel my pulse race and the sweat pour down my face. Perhaps I was just reliving the "Crank" films again, but I was pumped. It also happened to be written by David S. Goyer which means it could rock or suck (the latter referencing "Blade: Trinity"). Needless to say, if there was a group to get Ghost Rider back on track - it was these folks.

The time of a prophecy has come. A child is being hunted by the Devil himself for a ritual that would make him all powerful even on Earth and the clock is running out. A French religious man Moreau (Elba) has done all he could and failed. Now his only hope to save the child and save the world will be placed into the hands of a rogue cursed man. A man cursed to stalk evil endlessly. A man whose alter ego includes a flaming skull and fiery chains. Moreau must find the Ghost Rider, Johnny Blaze (Cage) before its too late, but will the tortured and corrupted angel within Blaze consume them all before he can save the day?

"Ghost Rider: Spirit Of Vengeance" is a step up above the first film. Then again if it was worse, that would make it one of the worst films ever made and it isn't. That being said, the film is also very far from being all that good. It still lacks cohesion of elements and styles that bogged the original one and sometimes Neveldine and Taylor forget their focus and start taking tangents with characters and story. What "Spirit Of Vengeance" does have going for it is the fact that its entertaining as hell. That's something at least.

The largest obstacle that "Spirit Of Vengeance" has to overcome is it's PG-13 rating. It really struggles with this. Neveldine and Taylor are known for their spastic and often offensive films - did you see "Crank" and "Crank 2"? - and this sequel really wants to go to those really violent and dark places. It can't though and quite often its obvious that their hands were tied in pushing the edges of the film into new territory. It gets away with a few things in its style to get around the violence with some great dark atmosphere and visual cleverness including an awesome scene where Ghost Rider takes a massive digging machine to gorge out some arms dealers. It doesn't stop the film from pushing forward with some great action sequences though with a stunningly awesome car chase finale and some fantastic new dark art design to mirror the tones of the film. If anything, it was hard not to enjoy the film for its renewed faith in staged action set pieces.

Beyond its stronger atmosphere and action though, "Spirit Of Vengeance" tends to fall into the same prat falls that its predecessor succumbed to. The balance of darkness and mainstream friendliness is misguided and the script likes to do a few odd things that create unintentional humor. On one hand, the plot and characters are simplified down for a more straightforward film that allows the action and visuals to become the focus. On the other hand, the film seems too simplified and lacks a humanity to connect to for Blaze and his cohorts. The connection between the child, his mother, and Blaze seems rather forced and underdeveloped while the film takes some odd twists for the sake of padding it out. This includes (and it pains me to say this) a rather pointless and padded detour to some French monks with a cameo from the legendary Christopher Lambert. Although there is some important plot triggers in these moments, they seem unnecessarily drawn out.

These derailing script moments are only worsened by a hit or miss cast. Although Elba once again steals the film from his leading actors (he also had a brilliant secondary role in "Prometheus"), the rest are unacceptably cheesy and poorly crafted. Cage is once again a bane for the character as his uneven performance lacks the depth needed to sell it and our two villains (although better than the villains in the first film) once again fail to invoke fear. When Carrigan turns into Blackout it gets fun, but beyond that its straining to try and believe any of it.

There was a lot of hatred for "Spirit Of Vengeance" when it was released and I don't necessarily agree with that. This second film in the "Ghost Rider" series is bad, but at least this time I had fun watching it with its better crafted action and stronger sense of style. It's rarely consistent in anything (where the hell did those animated moments of poor narration come from? And where did they go half way through?), but considering its poor foundations it had something going for it. Honestly, I enjoyed this film much more than I should have and I foresee this one gaining a cult audience down the road.

Written By Matt Reifschneider
Posted by DarkReif at 2:02 PM