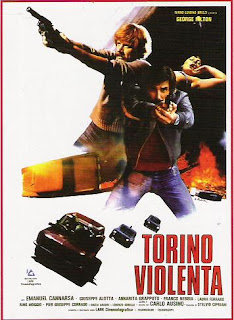 Good 'ol George Hilton, now that's an Italian cult actor fans can count on! It seems that 99% of the Italian films he appears in are good. From Spaghetti Westerns to Gialli but what do we exactly have here with "Double Game"? A Poliziotteschi film? SWEET! I love this genre! Too bad this films falls in the remaining 1% as this is far from being a good Euro cult treat thanks to the film really lacking any style or real substance.

Hilton plays a typical "Dirty Harry" inspired cop that is fed up with the rising crime in the city of Turin. Robberies and murders are on the rise and Hilton and his Charles Bronson/David Caruso hybrid ginger partner are sick and tired of putting in long days to ensure the crime doesn't get any worse. Thankfully a vigilante known as "The Avenger" is on their side by knocking off bad thugs in the middle of the night.  Should they call New York to make sure Paul Kersey hasn't relocated to Turin?
George Hilton is a great actor and it's a damn shame all the his character is so one-dimensional and superficial. It's not just his character but the whole damn cast is a drag with no-one to lead this dreary script to a worthwhile conclusion.
Italian Poliziotteschi films are known for stylistic directing, violent action and /or enthralling stories. "Double Game" strikes out on all three accounts. First of all Carlo Ausino is one of the most un-stylistic directors to emerge from the country give the film a dreary, boring look about it not aided by its sluggish, lifeless plot with a predicable ending that people could guess before the film even starts. Sure there is some violent scenes but the audience just might be asleep by the time they show up.
"Double Game" is better known in Europe as "Violent Turin" tricking people into drawing connections to such other similarly titled Euro Crime entries as "Violent Rome" and "Violent Naples". DO NOT be fooled into thinking "Double Game" is going to be as good as those far superior examples of the genre. If it weren't for the draw of star George Hilton, "Double Game" would have fallen into obscurity much like it's sequel "Tony: Another Double Game". I can't say I regret seeing the film (I'm a sucker for rare Italian cinema) but "Double Game" is only for the most forgiving fans of the genre.

Written By Eric Reifschneider
Posted by Cronosmantas at 7:22 PM