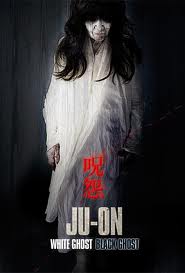 BLOODY NOTE: Normally I would review each of these hour long films separately, but the consistency that they display between the two a lots them the same rating. They have the same strengths/pitfalls and any differences will be mentioned in the review. So don't flack me for it.

It might surprise some of you to know that the massively successful "Ju-On" series originally received its start on television and despite two great theatrically released films and a series of remakes for the US under "The Grudge", it was only fitting for the franchise to celebrate its 10th anniversary by heading back to where it started. Thusly, we were given two short films under the "Ju-On" moniker as "White Ghost" and "Black Ghost" which take the general concept of the theatrical series and give us two stand alone stories. The quality of these films are hit or miss, but considering they were made for TV its hard not to be somewhat impressed with them.

White Ghost: When a teenage girl begins to see ghostly images of her elementary school friend, she begins to unravel the ghastly events of what happened to her when her brother brutally murdered the entire family and hung himself.
Black Ghost: A struggling family is pushed to further limits when their teenage daughter begins to succumb to odd psychological issues. The doctors are torn about what to do and only a woman with spiritual powers suspects that a begrudged ghost is living in the girl.

My initial reaction to the films was "Oh my, does this look like a made for TV movie." The films have a very cheap look that probably reflects the true budget of these pseudo-spin offs. Just don't let this look bog you down. And while you are at it, don't let anything about the budget get in the way of what the films does well - this includes the hit or miss acting and the some of the lackluster special effects. The acting can range anywhere from atrocious to surprisingly effective depending on the extent of screen time and story while some of the special effects are hindered by the budget including an obvious mask on the old White Ghost and the odd paint/CGI to make the girl in the second film black. This leads to a few moments of unintentional humor (the bright basketball that the ghost carries in the "White" or the odd scream/gurgle collapse of the teenage girl in "Black") that could have been avoided. Despite these flaws though, both films succeed at the the things that are needed for them to work.

For made for TV films, both "Black" and "White" are insanely well directed to promote smart storytelling and atmosphere. "White" mimics the first "Ju-On" with relative effectiveness in how it jumps between characters and time frames to make a rather simplistic supernatural tale much more effective in creating mystery and dread for the characters. We spend the entire film concentrating so much on the details to put it altogether that the scares seem to leap out of nowhere. Even though "Black" takes a much more conventional manner with its story telling (far more streamlined and focused on a few specific characters rather than the slew of the "White"), it still builds a fantastic sense of dread that one feels like they are holding their breath. For TV films, both are quite heart pounding and scream inducing.

There is a lot to derail these films and the constraints of budget and solid casts do hinder the films more so than one would hope. Considering that both films were made for TV though, each one does a very impressive job at building great terrifying sequences of mystery and fear whether its the repetitive spooks in the opening of "White" or the exorcism of "Black." For that, I highly suggest fans of J-Horror or the "Ju-On" films take a gander at these immediately. They certainly aren't great due to some lacking money and unintentional humor, but man...these films still make it hard to sleep at night.

Written By Matt Reifschneider
Posted by DarkReif at 11:05 PM