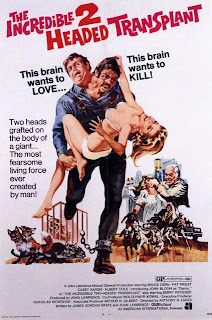 Like the title suggests the plot to this film is quit ridiculous. We have a surgeon (played by respectable actor Bruce Dern; why he is in a movie like this only his paycheck will tell) who is experimenting with grafting a second head onto animal bodies. Oh...I wonder where this is going! A maniac killer is on the loose and comes to his property, kills his caretaker, injures the caretakers huge yet mentally challenged son, and then injures himself in the process. Our doc finds him and then in normal crazy scientist fashion, decides to graft the maniacs head onto the hillbilly half-wit's body. As predicted his two-headed creation escapes and...you guessed it...havoc ensues.

Though the title and premise makes one think they are going to be in for a great schlocky good time, it actually wasn't all that fun. This grade Z film is actually rather tedious with a grating film score. The directing is boring point and shoot method and the two-headed effects on the monster are primitive and quit silly. Being a seasoned B-movie veteran I was expecting to have a hell-of-a-good time but mostly ended up bored.

One thing I do have to give credit to is the cast as they all played the film with straight faces, a feat that must have been nearly impossible.