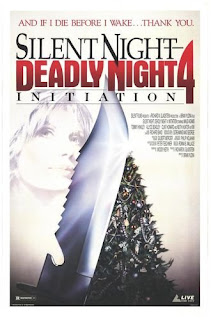 Eagle-eyed horror fans will recognize the name in the directing credits. It's none other than Brian Yuzna. With producing credits on "Re-Animator" and "From Beyond" and directing credits on such films as "Society", "Bride of Re-Animator" and "Return of the Living Dead III" one can expect a really bizarre film. And bizarre is what we get. Actually if you look up bizarre in the dictionary it will have a picture of Brian Yuzna and a "see also" section saying "Initiation: Silent Night, Deadly Night 4."

After an impressive title sequence and a likeable score by Richard Band, we get introduced to a news paper columnist who wants to break out into writing big stories. After a bizarre spontaneous combustion occurs at an apartment building, she investigates only to find out that she will become the next victim to witch coven that prays to bugs, worms and other gooey nasty stuff.

"Initiation" is full of bizarre imagery that we can only expect from Brian Yuzna, who in my humble opinion is a more tongue-in-cheek version of David Cronenberg as his films tend to focus on the human body and uncomfortable topics but splashed with over-the-top gore.

The directing, effects and acting is top notch (even having bizarre homeless character played by Clint Howard) but the story is a little unfocused. The witch coven isn't explained all that well and leaves much to be desired. Despite the plot's short-comings there is enough crazy imagery, violence, and action to keep one glued to the screen. I actually find "Initiation" to be a nice companion piece to Brian Yuzna's underappreciated directorial debut "Society."

People looking for a slasher film are going to be pissed and they have every right to be with a title like "Silent Night, Deadly Night 4." The marketing people no doubt thought the film would do better if it was marketed as a sequel in an already established franchise. I feel it actually hurt the film as people now tend to overlook it due to its title. This bizarre film deserves to get discovered and open-minded horror fans that can get past the title will find a interesting little unpolished gem.