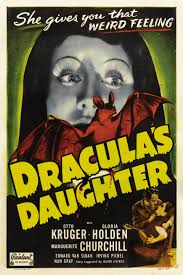 With the success of Universal's sequel Bride of Frankenstein one knew it would only be a short matter of time before they decided to make a sequel to their other successful film Dracula. But how can they make a sequel when Dracula got staked to death at the end of the first film? Answer: bring in an offspring. That's right, Dracula's Daughter marks Universal's first sequel attempt by adding an offspring into the title (Son of Frankenstein and Son of Dracula are some other examples). To no surprise really, this comes nowhere near the grand sequel impact of Bride of Frankenstein.

The film begins right where the first film left off in the basement of Dracula's house in England with Van Helsing answering to the police for the death of Dracula. For some reason they do not buy his story of Dracula being a vampire. Come on...a bloodsucking creature of the night is very plausible! While dealing with the police over the murders he committed, Dracula's daughter comes to town with her creepy ass servant. She falls for a psychologist and persuades him to cure her of her "illness." When she figures out she can't be cured, she kidnaps his love interest in order to convince him to be hers.

Gloria Holden has a very unique striking face and she is cast well as Dracula's daughter for this purpose. However her character didn't strike any fear into me. She just seemed weak and her servant even seems to overpower her. This could also be a product of the times as women back then were supposed to be more subservient to men. The character of Van Helsing (again played by Edward Van Sloan) is also a disappointment as his character is mostly absent dealing with the law. Shouldn't he be hunting the bloodsucker down instead of being written off dealing with legal jargon? Most disappointing. The film also has a lot of added humor and not to the film's benefit. This comedy works against the film and the film fails to generate any creepy atmosphere that was so prevalent in the original.

Overall this is a disappointing sequel to Universal's grand Dracula. That's not saying it's bad but it really is only watchable matinee fare.