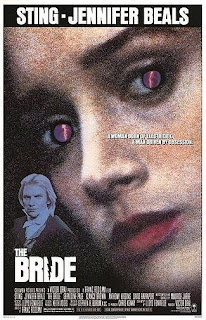 I put off watching this film for the longest time despite being a fan of the original 1935 film Bride of Frankenstein. The reason I did is because I'm not a fan of either Sting or Jennifer Beals. Since I was having a Frankenstein marathon I decided to finally sit down and give this film a try.

Like I expected I was hardly impressed. The first thing that strikes me strange about this film is that it's a remake of a sequel. The original Bride of Frankenstein for people who don't know was a sequel to 1931's Frankenstein. Though this is a remake of that popular SEQUEL, this film itself isn't a follow-up to any other Frankenstein film. Right away the viewer better be familiar with the story of Frankenstein or else they are going to be lost.

After a really blah title sequence the film opens up with Dr. Frankenstein in his castle preparing to bring 'The Bride' back to life whilst his first creation (the monster played by Clancy Brown) is waiting in the dark. This great sequence that in the original film was left for the final reel. Here it opens the film so we know it's not going to be a direct remake. After interesting first sequence the film goes downhill fast.

Dr. Frankenstein starts to take a fancy to his cute-as-button creation and his first monster gets pissed, blows up his lab and high tails it into the forest where he ends up befriending a midget (?!?!?!). No I am not making this up. This is where the story splits in two as Frankenstein takes 'The Bride' and starts to teach her manners, takes her on horse rides, etc and 'The Monster' and his midget friend go on a journey and end up joining a circus. Again I am not making this up. I forgot to mention that it seems that both 'The Bride' and 'The Monster' have a psychic connection. Yet again I am not making this up. By the time the film starts picking up towards the end the viewer has already lost interest.

The biggest problem with the film is that it is extremely short on "horror". The filmmakers forgot that the original Bride of Frankenstein was a horror film above all and tried to make it into a romance film. For some reason many filmmakers look down upon the horror genre (no doubt these filmmakers do) and they took a classic story and tried to turn it into something else...and failed miserably.

The directing is another problem as Franc Roddam gives the film a rather blah, almost TV made look. This is a shame as the film does boast impressive sets and costume design. The dialogue is also blah and sometime just awful. For example 'The Bride' screams at a cat. When Frankenstein asks why she was scared of it she responds "You never told me about cats. I thought it was a small lion." She's heard of lions but not cats? grrrr...

Clancy Brown, an actor I usually like, was also very boring as Frankenstein's monster. This is the badass that played the psychotic villain in Highlander? Not to mention his make-up has to be the worst make-up design for the Frankenstein monster in any film adaption.

Overall I found the film to be boring, overlong, and short on style. The only other thing to really praise about the film is the acting talent of David Rappaport as Rinaldo the Midget as he steals the show. Yes a secondary character is more interesting than all the main characters put together. As I write this another remake is in the works. Let's hope those filmmakers decide to stay closer to the source material. My advice is to skip it and stick with the original.