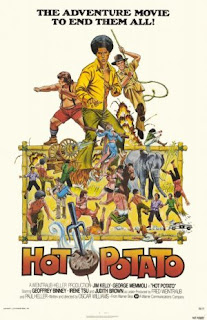 When I think of a martial arts film the first thing I crave is a hot baked potato, with butter, sour cream and chives. Hey, don't make fun of me for that because I know I'm not the only one in the world that thinks this. How do I know? Because the makers of this martial arts monstrosity decided to call this hunk of crap "Hot Potato."

Believe it or not this is a sequel to "Black Belt Jones". Most don't know that and that is perfectly fine because obviously one can't make a connection between the two films by the title alone. I mean "Hot Potato"? Okay obviously by the title one can't take this film seriously.

My hunch was right as this film goes for the tongue-in-cheek approach. The film begins with a young women brought to a ninja camp somewhere deep in Africa where their leader calls her father and says she will be killed or unless he pulls aid. In comes 'Black Belt' Jones and two obnoxious sidekicks to rescue her.

One of the sidekicks is a slick talking guy from Chicago and the other guy named, I'm not kidding, White Rhino is a pot-bellied pig of a guy that is supposed to provide "comic" relief. Our trio rescue our kidnapped victim within the first 30 minutes and the rest of the film is spent meandering from one poorly choreographed fight to the next. The plot is actually so thin that Jim Kelly only says probably 10 lines in the whole damn film. Considering I'm not a fan of Jim Kelly I should actually consider that a blessing.

The thing that bothers me about this film is that it doesn't know if it wants to be totally goofy or just another run-of-the-mill chop socky flick. Some of the fights have Looney Tunes sound effects like winding up fists and others don't. The film is also full of fourth grade boy humor like "you just wet my shoes! You just be lucky it wasn't number 2!"

This confused film just ended up annoying the living shit out of me and I kept starring at the timer on my DVD player asking the ghost of Bruce Lee why didn't the martial arts gods take Jim Kelly instead of him. This is hands down the worst martial arts film I have ever seen (so far) and only young boys who think dick and fart jokes are funny will be amused by this crud. This shit-quel makes Black Belt Jones look like a Shaw Brothers epic.