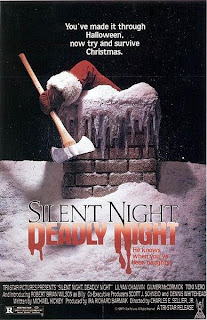 Imagine this. Two guys in a bar talking about how popular slasher films are. One mentions that slashers around holidays seem to be in. The other says Halloween has been done but what about Christmas? The other guy sees $ signs and quickly scribbles a script outline on a on his tab receipt. This is how I imagine Silent Night, Deadly Night was born.

I will say right off that bat this is not a good movie, yet it's just as popular among horror fans today as when it was released back in 1984. There is a special aura around this mean-spirited picture that transcends time when other much better slasher films of the era such as "The Prowler" and "Sweet Sixteen" seem to be forgotten. This I believe is from all the extreme controversy the film caused with critics and parents. I mean can you blame them. Children were seeing the TV ads and asking their parents why Santa was carrying a bloody axe. This bad publicity just brought more attention to the film. Remember the golden rule: there is no such thing as bad publicity. I will admit it worked on me. I had to see what all the commotion was about and what I got was another poorly made slasher.

The film begins with a young boy who is warned by his catatonic grandfather that Santa punishes and wouldn't you know it, later that night a criminal dressed as Santa kills the boy's father and rapes and kills the boy's mother. Off to an abusive orphanage he goes (which will not be popular for the Catholic crowd) where the boy is whipped. He grows into a young man and when he is assigned to wear a Santa costume at the toy store he works at, he flips out and goes on a slasher rampage.

Now I mentioned before that this was a poor film but it can be entertaining being that it can cause many unintentional laughter moments. It transcends on some degree to the "so bad it's good" category. People looking for an over-the-top slasher will have a fun time as the film is full of un-intentionally funny one-liners ("Punish!"), graphic violence, and nudity. Others will just be offended. Perhaps the funniest scene is when "Santa" gives a little girl a bloody exacto knife as a present. People actually looking for a "decent", psychological killer Santa film are recommended to see the 1980 film "Christmas Evil" which predated the much more popular Silent Night, Deadly Night by four years! That film however isn't has fun as the notorious Silent Night, Deadly Night or it's four sequels.