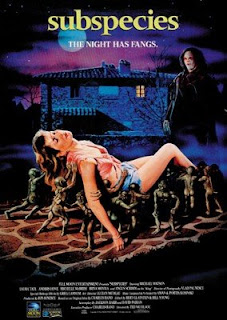 There is absolutely nothing original in this vampire "epic" yet there is something about this film that strangely keeps me interested and keeps me coming back, revisiting the film from time to time. Everything from the vampire design to the plot is a stolen from every other vampire movie ever made yet me, like many others, seem to like it and the Subspecies series has gathered a rather large cult following. The film proved to be so popular for Full Moon films that it inspired 3 sequels, a spin-off, and another sequel in the works. That's pretty impressive for such an unoriginal film.

The film opens with none other than the Tall Man himself Angus Scrimm (sporting an awful wig) sitting in front of a fire while holding holding onto a "bloodstone" (more on that later). In comes his son Radu, a monstrous looking figure that looks like an offspring of Nosferatu. I can't believe that this vampire is the offspring of Angus Scrimm; he really should do some research to see if Nosferatu ever worked as a milk man and delivered to their castle from time to time when he was away on business. Radu, like we couldn't tell from his appearance, tells his father of his evil ways so his father cuts a rope and drops a cage on him that just perfectly placed above. This cage is so fucking big that apparently only a vampire blinded by evil wouldn't notice it's presence. In a strange turn Radu then breaks off three of his long finger and they then mutate into some little demon-like minions (presumably the "subspecies") that release him. He then kills his father to claim the bloodstone. How Shakespearian...

In comes three college exchange students from the US who come to Romania to study. They meet up with a young hunk with a cool retro early 90's hairdo. This guy, come to find out, is Radu's brother even though he looks completely normal. Brothers my ass! Looks like their mother had an affair with Nosferatu after all! Heeding his warnings about a local castle, the girls one by one succumb to the wrath of Radu and it's up to retro cool good vampire to save them.

Again nothing original but I like it somehow. Perhaps it's the amazing Romanian cinematography that director Ted Nicalou captures so greatly giving the film an authentic Gothic atmosphere. The cast for the most part is also good especially Anders Hove as Radu. You can tell he loves playing the role of the drooling vampire. His raspy voice is just the sprinkles of the cup-cake for the character. It's amazing that an actor that hasn't done much else other than Critters 4 would be so good. The makeup effects are also really impressive making this vampire the coolest looking this side of Salem's Lot and Radu's father Nosferatu. I almost forgot to mention the score! The score is perhaps the best part giving the film even more atmosphere. Great stuff!

Despite for some reason liking this film, there are many things that bug me. My first problem is the "subspecies" themselves. The little minions add nothing to the movie! Okay I understand this film is produced by Charles Band and he has a hard on for little monsters. I mean he produced Ghoulies, Dolls, Puppet Master, Troll, Blood Dolls among others but that doesn't mean an "epic" vampire movie needs them! The "subspecies" aspect isn't brought up much in the film (hell I don't even recall the term subspecies being used) yet it serves as the title of the movie? What the fuck were they thinking! The visual effects of the subspecies themselves are also rather laughable. The "subspecies" idea should have been left on the bathroom floor on the piece of toilet paper is was written on. I'm also confused about the idea of the "bloodstone" itself. Despite it looking like a cracker jack toy, not much is said about it. It seems to provide a unlimited supply of blood that Radu likes to suckle on throughout the film but what else does it do? Give eternal power? I don't know and I don't see why it's so god damn important to the plot. It would have been better story if Radu just killed his father for power instead of a toy trinket.

Other than that this film might be an interesting find for fans of vampire films or decent B-films. It has a large following so there is something here that people will probably enjoy. It won me over despite it's shortcomings.