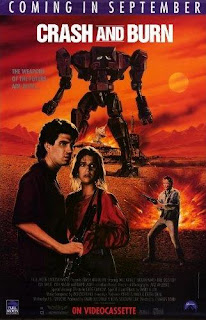 I love post-apocalyptic films. I even enjoy bad post apocalyptic films and director Charles Band is no stranger to the bad post apocalyptic genre. He first directed the 3-D b-movie monster classic Parasite in 1982 and returned to the subgenre 8 years later with Crash and Burn...and look at the cover art! A hot sand-blasted landscape...and what's that, a huge fucking robot in the back ground! That's right we have a huge fucking robot! This is going to be the most bad-ass post-apoc film ever! No, of course not and typical with Charles Band films the poster art is much better than the actual film.

As post-apoc films go we have all the basics: a hot, sunny landscape, a depleted ozone layer, an anti-hero, cyborgs, and a evil corporate company. Did I mention we have a huge fucking robot?

Apparently in the economy has collapsed and in the collapse a huge multi-national company known as Unicom has taken over the government. A group of anti-Unicom rebels known as the Liberty Union run a TV station out in the middle of the desert and air programs that, surprisingly, piss off the company. In comes our anti-hero, a Unicom man who's motorcycle breaks down so he takes refuge at the TV station. As expected the rebels don't take too kindly with him at first. While there members start being killed off in Agatha Christie "Ten Little Indians" style because someone there is a cyborg..errr...a Synthoid that is programmed to kill.

I know what you are all thinking...where's the giant robot? Well it's in the movie, don't worry. But it doesn't come into play until the last few minutes of the film. Most of the movie it's laying on its side in junk pile until it's turned on to save the day. People looking for a lot of giant robot action are better off looking somewhere else, like the movie Robot Jox. Strangely enough this film was retitled Robot Jox 2: Crash and Burn in Germany despite the fact this barely has any giant robot action.

Overall this is passable post-apoc fair. Most of the film is spent on talking and less on action making it far less enjoyable than the Italian fodder that filled the video shelves in the 80's. The film is just kinda blah for the usually fun post-apoc subgenre. Still one could do much worse to kill an hour-and-a-half.