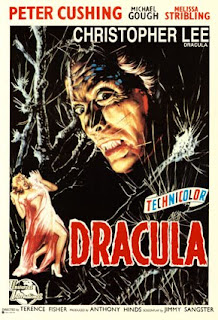 When someone mentions "Dracula" the image that comes to most people's minds is the classic 1931 Universal film with Bela Logosi and his Hungarian accent. This image of Dracula has worked its way into pop culture. Everything from the Count Chocula cereal to "The Count" on Sesame Street take its image of Dracula from Legosi. Of course his image of Dracula has not been the only one as there have been umpteen adaptations of Bram Stokers classic novel Dracula over the decades. We had the creepy 1922 silent classic Nosferatu, the 1979 version with Frank Legella, and most recently Francis Ford Copella's overblown 1992 version among countless others. However my money goes to the Hammer's 1958 adaption Horror of Dracula (or simply known as Dracula everywhere else in the world).

This is a bold statement. How could I pick a Dracula film other than the Legosi classic to be my favorite? The first answer is Dracula himself portrayed by Christopher Lee. Christopher Lee has the ability to make Dracula cultured, seductive to women, and menacing all in the same film. Vampire films tend to make vampires either complete monsters or like more recent films only "pretty and seductive" (Twilight I'm looking at you!). Lee can do both. The best part is when Lee becomes a menacing monster as his eyes become bloodshot. Once you see this image of him you won't doubt he can kill anything or anyone.

The atmosphere and pacing is also superb. Terence Fischer, director of Hammer's first horror film The Curse of Frankenstein, again delivers a film thick with gothic atmosphere. Tell me what character is more gothic than Dracula? Fischer's opening shot of blood dripping onto Dracula's name stenciled onto a coffin is the perfect set-up for the gothic atmosphere. Fisher is also able to deliver the film at a good pace with the perfect amount of exposition and action. Young people that are fans of today's quick cut editing are no doubt going to find this film boring but for a gothic hammer film, the pace is great and the final chase and fight scene is riveting.

Overall I was extremely pleased with the film and had a wonderful time. I even enjoyed the film more than Hammer's previous horror film The Curse of Frankenstein and this film makes me want to revisit the gothic world of Hammer over and over again.

Horror of Dracula proved extremely popular for hammer and this film produced eight, count 'em eight sequels! Dracula even gave Jason Voorhees a run for his money! Seven of the sequels feature the character Dracula and Six of them feature Lee in the title role. Hold your breath as here comes the list: The Brides of Dracula, Dracula: Prince of Darkness, Dracula has Risen from the Grave, Taste the Blood of Dracula, Scars of Dracula, Dracula A.D. 1972, The Satanic Rites of Dracula, and The Legend of the 7 Golden Vampires. More Dracula reviews to come...