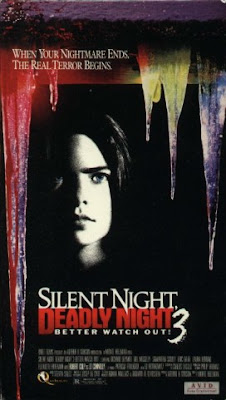 It's hard to believe that after the disastrous stock-footage filled "Silent Night, Deadly Night Part 2" that a third film would be made. However filmmakers forged on bringing us yet another killer Santa picture...well sort of. One good thing however is that there is hardly any flashback footage resulting in a new movie with 98% new footage. At least the filmmakers learned from that grave mistake.

The film opens with a really cool dream sequence with a young girl and a killer Santa in an all white room and hallway. She awakens and we find out that she is blind and a doctor is trying to use her ESP ability to get into the mind of a Ricky, the killer Santa of part 2, who is in a coma. I find this plot a real stretch. I mean they actually kept that psychopath alive just to study? Talk about our tax dollars wasted! That however is not the most ridiculous aspect. The killer's brain has been reconstructed under a plastic bubble on his head. Yes you read that right. What! Am I supposed to take a killer with a plastic bubble as the top portion of his skull with his brain visible seriously! What's even more amazing is that the filmmakers are taking this subject matter seriously unlike the tongue-in-cheek second entry. If anything the filmmakers should have taken the tongue-in-cheek approach with silly material like this.

Predictably the killer awakens and follows our blind "heroine", her brother and his girlfriend to their grandmothers house on Christmas where carnage occurs.

On the surface "Silent Night, Deadly Night III" is a better film than it's processors. It's overall just better made on a technical level. However it makes one fatal mistake...it's boring. The previous 2 even in all their awfulness still kept your attention. SNDN3 however makes one's mind wander a tad while watching and the killings (which films of this nature are watched for) and unoriginal and too few.

Another problem is our main character. The blind girl is unlikeable and well...just a bitch. I can't find myself rooting for her. The killer is also blah and he is even portrayed by genre great Bill Moseley. Horror fans may remember his great performance as chop-top in "The Texas Chainsaw Massacre 2" and as Otis in "House of 1000 Corpses" and "The Devil's Rejects." The filmmakers however don't use his acting ability here and he is just a ridiculous looking, "Frankenstein" shambling slasher that doesn't even wear a Santa suit.

Overall SNDN3 is forgettable and spends too much time with people talking in a cars instead of showing stalking and slashing, and when it does it is un-inspired and tedious. This film marks the end of the continuous slasher Santa storyline as the next two sequels would be unrelated.