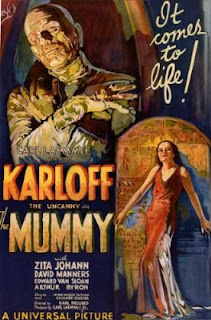 When someone says "Universal Monsters" people usually think of Dracula, Frankenstein, the Wolf Man...and the Mummy. The Mummy always seems to be the last on the list. For the most part I think many people find this film to be the least of the aforementioned films. I as a child also found The Mummy to be my least favorite of the four. Re-watching it again as an adult with an adult perspective I can still honestly say that it is still my least favorite of the major four films. This however doesn't mean I dislike the film just less than the others.

The film opens with an impressive Egyptian model for the title sequence and then the audience is thrown into Egypt in which a dig is being conducted on a mummy's tomb. When a sacred box is opened our Mummy awakens. After a very short sequence of the mummy in his bandaged form, he returns on screen as the more human looking Boris Karloff who is searching for the reincarnated soul of his long lost love.

As a child my major problem with the film is the lack of the mummy in his lumbering, bandaged form. If you look at any poster art or video box art to the film we see the image of Boris Karloff bandaged up in a casket. Even as an adult I still wanted to see more of our mummy lumbering around scaring would-be trespassers. However I still dug the eternal love aspect of the story of our mummy searching for his long-time love (something that went over my head as a kid). One thing that kind-of bugged me about the plot is how many aspects are very derivative of Dracula. Im-Ho-Tep has the ability to hypnotize people and control objects from a distance just like Dracula. Instead of a crucifix we have a necklace with a charm that wards off the Mummy. The screenwriter here also wrote the screenplay for Dracula so whether the similarities were consciously made I'm not sure, but one can't deny the connections.

Boris Karloff is striking as Im-Ho-Tep. His unique bone-structure of his face keeps your eyes glued to the screen. Zita Johann as the mummy's long love interest did have a exotic look, but some of her acting reminded me too much of a stage performance.

The direction to me was a little too standard. I believe this is due to the film being directed by a cinematographer as opposed to an actual director. Karl Freund did a wonderful job as the cinematographer on Dracula, but he just doesn't have the perfect knack to be a director. Because of this the film just doesn't have the pace and visual power of the other classic Universal films.

Overall I liked the film but I still prefer to watch the other Universal monster films as opposed to this. The Mummy still shows off its grand production values for the time (especially in its Egyptian scenes) and Boris Karloff is perfectly cast as our title character. People wanting to view a film with more on screen time of an actually lumbering Mummy must check out the B-grade sequels The Mummy's Hand, The Mummy's Tomb, The Mummy's Ghost, and The Mummy's Curse.