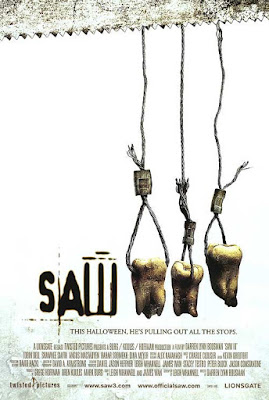 
All great franchises have their trilogies, right? So one assumes that in the case of a franchise like Saw, the third film, entitled Saw III, would wrap up a kind of ‘endgame’ for the Jigsaw killer. Initially, that is most certainly the tone that this film runs with. At its core, it’s much more of the same in a lot of ways, particularly after the second film broadened the scope of the series with parallel plotting and more characters than one can shake a stick at, so in that sense it’s easy to hop into if you’re familiar with the Saw formula. On the other hand, the manner that it plays things out feels a tad more personal than the previous installment and the tricks up its sleeve are more or less nuances to its script rather than the focus like the last one. Still, as it works with most of the sequels in this series, the results of Saw III are a mixed bag in execution vs content and it leaves the entire thing feeling a tad sour in the aftertaste despite its stronger moments.

It’s key to remember that Saw III works on a couple of levels though. When it first came out, the film worked as an endgame of sorts for Jigsaw, as we see him essentially on his death bed. His final tests, which focus on a vengeance driven father and a hospital surgeon losing faith in those around her, are layered nicely and easily use the parallel plotting to much stronger effect than in the previous entry. Part of this is because the manner that they start to intertwine is not nearly as shocking and is somewhat predictable compared to the twists of other entries. Still, the film definitely has this sort of endgame concept locked down for its villains, who actually share most of the stronger moments of the film together. In this regard, particularly when it first came out, works for the film.

Now the other layer of Saw III is that is only the second part of the above mentioned trilogy versus the final one. That is because Saw II, III, and IV are what I would consider Darren Lynn Bousman’s Saw trilogy due to the inherent connections between them all. In this regard, Saw III actually holds up on repeated viewings for the smaller details hidden in its script that indicate the next sequel is coming. They are often small moments, but they do come back to be significant later. This is just one of the reasons why the Saw franchise has survived as long as it has when it’s essentially a glorified modern exploitation series. The way that they built a franchise around it is rather fascinating and impressive and it’s in Saw III, during repeated viewings, that this comes to light.

Of course, those are the core reasons that Saw III works as a film because the tone is more personal and emotion driven and it has a great double hook of being an endgame and just another cog in the greater series. The rest of the film is more hit or miss. Bousman returns to the director’s chair and improves his game ever so slightly over the last one, using the style of the series to overcome some of the hiccups in its script and rushed production. The performances in the film are some of the best of the series, truthfully, and in that regard it’s a big step up, but there are definitely some problems in how its uses those. Initially, the trials of the vengeful father seem horrific and the traps included are unique and both gross and intense even if they rarely make sense (the pig liquifying scene still doesn’t really make sense and it comes off as awkward.) Yet, the series doesn’t make sense. If he saves them great, if he doesn’t also great? There is no larger motive for him to save the people outside of his own conscious. There’s no trick in the end where he needed all of them for something to save himself or anything. They are just fodder for the slaughter and that seems counter-intuitive to the concept. The finale is still great, although requires a strong sense of disbelief, so it’s washed away a bit, but still problematic.

All in all, Saw III is a success for the franchise and features some of the stronger moments of the entire series. The foundational concept is strong, but the rushed feeling script and the more outrageous traps don’t quite have the depth and meaning that the film wants the audience to believe they have and that’s a huge problem in driving this entry home. For fans of the series, Saw III delivers the kills and thrills, but it’s lofty ambitions with its script and concept only fly so far.