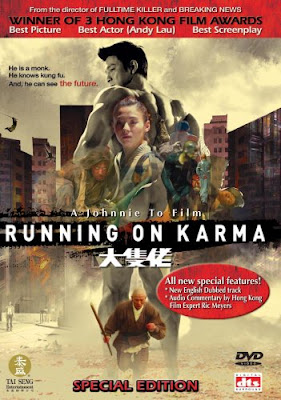 In my recent Johnnie To obsession phase, I came across Running On Karma his award winning drama/comedy/action/philosophical/artsy/super-hero-esque romance film (I'll get to that in a second) that has seemingly won over most of those whom have seen its contents. I love Johnnie To and the fact that it also has the brilliant Andy Lau as our main man Biggie (yeah, the version I watched used subtitles that referenced him as Biggie) I was already sold. What I got though was one of the most unusual experiences I've had with film and unlike any other Johnnie To film I have yet to see to date.

Running on Karma comes in when our 'hero' Biggie accidentally gets tied up in a police investigation concerning a murder suspect and the bust on the male strip club where he works. His massively muscle bound physique and his sharp intelligence/quick light footing (later on we learn he used to be a monk in the mountains, because cool) come in useful when he decides to help out a female detective with the case. Here's the kicker: Biggie can see Karma. Oh yeah. And he sees that there is bad karma around his new found friend (and blooming love interest) and decides to do what he can to change destiny and save her. Their pasts and futures end up colliding in a Buddhist moral story as things get far too complicated for our two main people.

So if that synopsis confused you, it's okay. The movie does a far better job of storytelling and making it all flow a bit better then I do in one paragraph. The mixture of all these elements would seem to be one of the reasons that this film should fail on so many levels, but somehow, in someway, through brilliant acting, a ballsy script, and the visual stunner that is To in the directing seat, make it work. In fact, it's more charming then not throughout its run time. Granted, you should be prepared for its initial awkwardness. Andy Lau's fake muscle suit looks a bit too fake in many moments, and the odd superhero scenes (the ones where he goes for some very odd baddies - like the contortionist or the slippery thief) tend to bring forth a bit of the 'what the hell?' aspect of the film. In the end though, these moments are far out weighed by the subtle romantic love story vibe and the philosophical layers that eventually develop in the film and make it so deep and remarkable. It's as if they wanted Running On Karma to be both sides of the extreme - both ridiculous and grounded in its entirety.

As I said though, somehow it all works in the end. At times I found myself a little taken back by its initial premise - I'm still not sure how he was able to decipher his visions of karma - but there was so much talent on screen and behind the camera that it was almost destiny that it would all fit together. Do I think it deserved all the awards it won - probably not, but it was still a great film that will sit with you for a while.